When Is A Yellow Card Given In Soccer?

How are policing, traffic lights, and soccer’s yellow and red cards connected? All three had a part to play in creating FIFA’s system of cautioning offending players in a way that everyone understands, whatever language they speak.

Soccer players are given a caution for committing one of a comprehensive list of yellow card offenses. But when do they get them? How much can it affect the direction of any game or the morale and performance of a team?

Does a yellow card inhibit a player from giving his best and affect the team as a whole? Knowing that if he gets a second yellow card, then a red card and automatic dismissal follows.

I learned some answers about soccer’s disciplinary code and where it came from when diving into the soccer carding system’s history. So here come the official soccer yellow card rules.

How Was The Yellow Card Invented?

Once I had decided that I was not cut out to be another Pele, Maradona, or Beckham, I knew my destiny. I was on my way through the training ranks to be a soccer coach. Going through my training, I learned just how the carding system came about and when it was introduced.

The answers turned out to be a bit of a history lesson, and it was all about two colors of the rainbow: yellow and red. How the carding of worldwide soccer players first began.

Back in the early 1960s, the problem of delivering discipline consistently in soccer came to a head. This was especially true for international matches.

It was in the 1962 World Cup Finals in Chile. The host country was playing Italy in the opening game. There was a huge fight early in the match, and the English referee issued a red card to an Italian player. The problem was he refused to leave the field. It’s said the excuse was he didn’t speak English. Didn’t understand the decision.

He refused to leave the pitch. Eventually, officials had no option but to send police officers onto the pitch to escort him off!

Years later, that referee, Ken Aston, pulled up in his car at traffic lights in London, watching the lights change from amber to red and back to amber again.

As he sat watching the changing lights sequence, he thought: “Amber, get ready to stop”; “Red, stop!” This sparked the idea in his mind on how to communicate with soccer players on the pitch no matter what language they speak.

Ken presented his idea to FIFA (International Federation of Association Football). They approved, and after some trials, the yellow-red carding system was introduced in the 1970 World Cup Finals in Mexico. It was rolled-out to a mixed reception in the years that followed.

It was a decision by FIFA that changed the game for the better. Now there is a whole string of yellow card rules for offenses that soccer players commit, on and off the field.

The main thing is, the system works. Not ideal sometimes, but it solves many problems, especially for referees. Essential in any match whether there’s a language barrier or not.

So, what are these yellow card rules? Leaving aside outright red and two yellows making a red. It is quite astonishing when you look at the lengthy list of ‘yellows for fellows’ – and ‘gals,’ of course.

In addition to those yellow card incidents that spectators see regularly, many lesser actions can also warrant a caution. One of the problems is that some of these rules are open to interpretation and opinion.

There are sure to be different views of various incidents on the soccer field. Diverse opinions and disagreements will always be heard. However, the referee’s interpretation of the rules is final.

Cards are issued for dangerous play when a tackle is made that could result in injury; holding or blocking a player; obstructing an opponent, or handling the ball to stop an attack, especially when there is the chance of a goal being scored; or feigning injury. 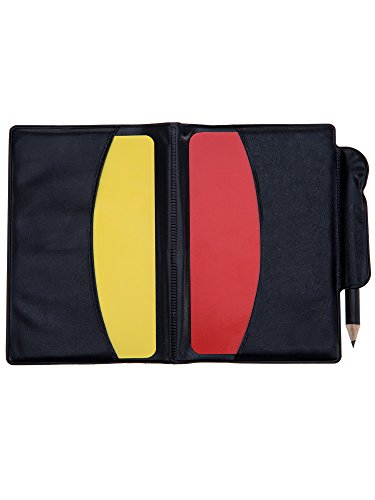 Most yellows we see are given for fouls, often resulting from a heavy tackle. The referee has to decide if the action was reckless or simply careless. If he thinks it is reckless, then he will take out his yellow card.

The card system rules do not stop at cautioning players for fouls. There are several actions a player might take that are regarded as misconduct, particularly arguing with the referee’s decision or generally disrespecting an official.

What constitutes unsporting behavior? A player might kick or carry the ball away, square up aggressively to an opponent, provoke an opponent; again, try to deceive the referee.

For example, exaggerating the effects of a tackle, maybe by rolling around on the ground in apparent agony, pretending to be injured.

Trying to get an unfair penalty kick decision by ‘diving’ to the ground when fairly tackled for the ball within the penalty box. On the other foot, defenders who have no hesitation in tripping a player with a scoring chance when they know it is just outside the penalty box.

Other behavior by players, such as not moving away from a free-kick position or generally delaying play, get the same cautionary treatment. The more a player continues with misconduct, the more likely a yellow will be issued.

Other Cases For A Yellow Card

Many other minor infringements could attract a yellow card, though if referees were to stick rigidly to the rule book rather than use discretion, a match could descend into farce.

Many goalmouth incidents could come under the headings of fouls or obstructions yet are often allowed to pass by referees. I have lost count of the number of times I’ve seen defenders wrapping their arms around the body of an opposing player at a corner kick or free-kick.

How Long Does A Yellow Card Last In Soccer?

Once the game is over, the caution is removed from the player, and they start the next round with no yellow card to their name. However, in competitions that run over a season, yellow cards may be accrued up to a particular previously decided number, and then that player will be suspended for a game.

Do Players Get Fined For Yellow Cards?

They are not classed as fines, but they have to pay some administrative fees.

Depends on the competition. They expire at the end of the match but, if previously decided, may count towards a predetermined number, say five, and then lead to a one-match suspension.

Can You Be Suspended For A Yellow Card?

Not as a rule for one yellow card but possibly for an accumulation of cards over several matches.

Should the players and their coaches be expected to know and remember all the rules, all of the time? There is no doubt that the yellow and red-carding system is a necessary and useful feature of soccer matches.

A referee’s job, supported by his officials, is to control a game so that neither team gains an unfair advantage and eliminates where possible reckless or dangerous play is likely to cause injury. In doing so, an entertaining game is created. Resulting in satisfaction, not just for supporters of either team but also for impartial lovers of the soccer game worldwide.

Is this achieved one hundred percent? Unlikely. The pace of any match, particularly at the highest level, and the outcomes at stake, place heavy pressure on players and officials alike.  Human nature is played out on a stage, and perfection cannot be expected or achieved.