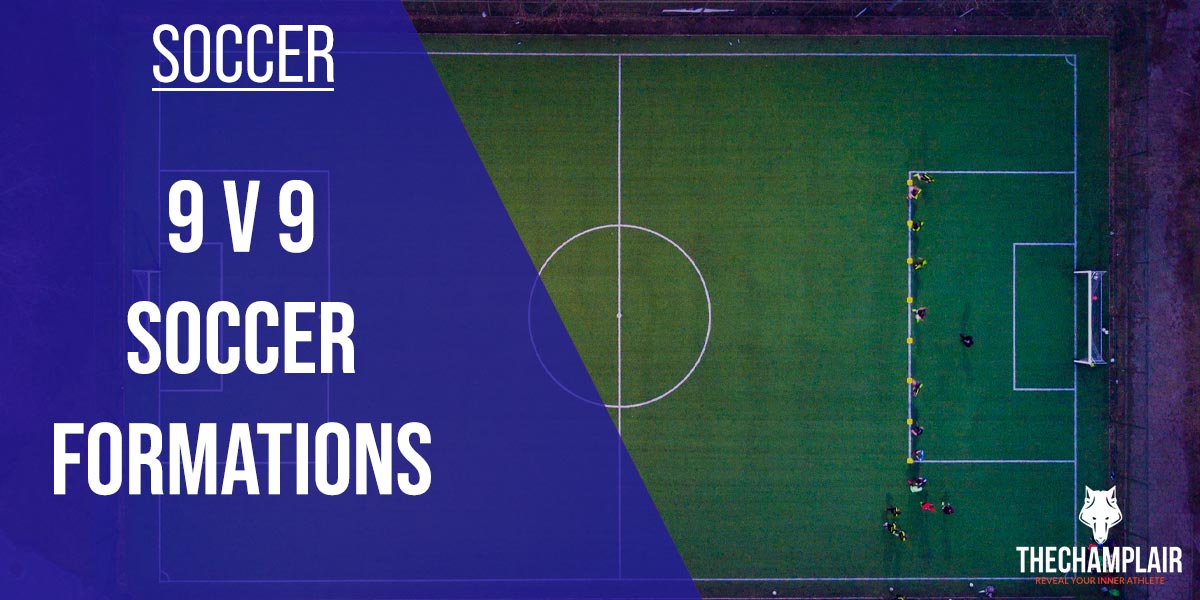 All soccer fans are accustomed to popular formations in the classic 11 v 11 game. Whether it is the age-old 4-4-2, or the Mourinho-esque 4-3-3, or the somewhat forgotten 5-3-2 with a sweeper sitting behind the two center-backs.

Tons of analysis is done on 11 v 11 formations and how the positional set-up can sometimes grant an underhanded team advantage over a better opponent. The same level of scrutiny, however, is not applied to the 9 v 9 version of the game. It is understandable from a general standpoint: there simply isn’t enough global wide-spread interest. It is, however, worthwhile exploring the different set ups in the 9v9 formations.

The 9 v 9 game is primarily played in low-age leagues, U12 or U13. Studying the tactical set-ups in this version of the game is exciting, as it involves the transition of young players from free-ball footballers, to team footballers. It allows them to understand the importance of positional play in soccer, and the lessons from these can definitely be carried onto the adult version of the game (11 v 11).

As with the 11 v 11 game, 9v9 soccer formations are generally made up of four lines of players:

Soccer is a dynamic sport, so the lines aren’t meant to be rigid (i.e. defenders can attack, attackers can and should defend), but instilling the importance of general positions in young players is essential. If you are a central defender, your primary responsibility is to defend at the back, and not rush to the wings to receive the ball. At this level, the emphasis on soccer being a team sport is drilled into young players.

There are tons of permutations on how you can set 9v9 formations in a soccer game. I focus on some of the base set-ups that can then be tweaked to make the most of players’ strengths and weaknesses. 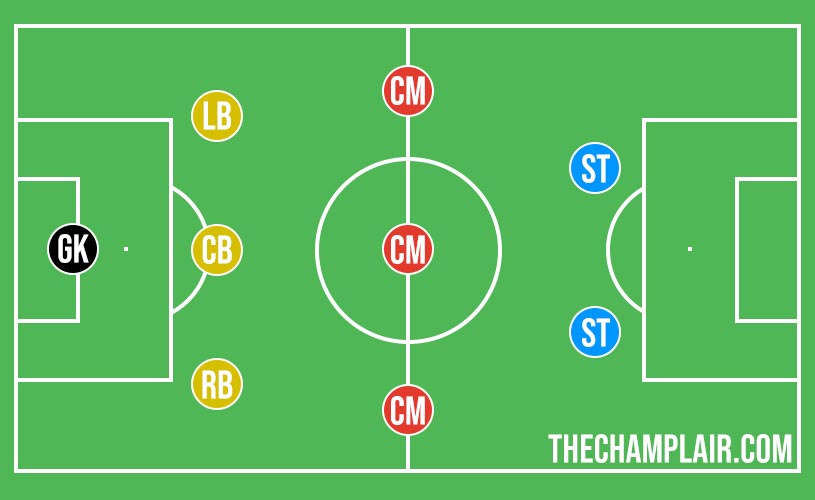 This is likely one of the most common 9 v 9 soccer formations. It mimics the very common 4-4-2 in the 11 v 11 version of the game, taking away one player each from the defensive and midfield lines. The diagram above indicates the general or average position of players, but players are free to move in between these lines depending on the spell of play, while keeping in mind their primary responsibilities and positions. 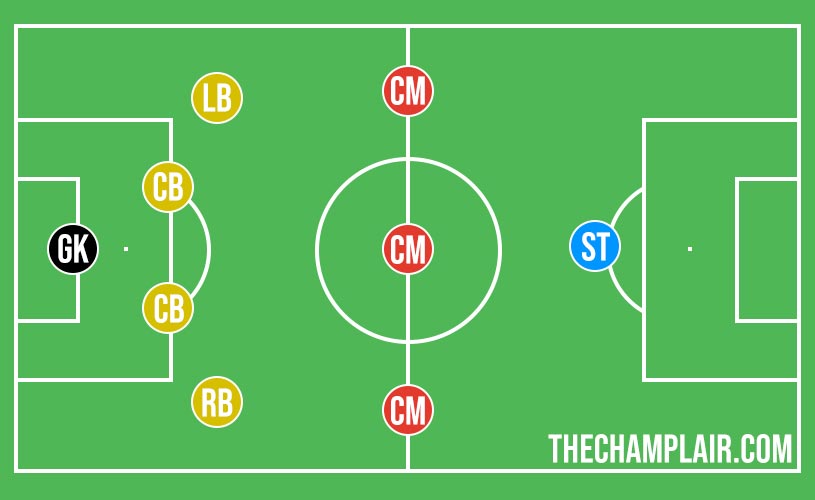 The 4-3-1 allows teams to play with a back four, which is the standard for most teams in top tier football. The two center-backs are supposed to hold the back-line, while allowing the full-backs to alternate between attack and defense depending on the quality of the opposition, and the phase of play.

The central midfield (CM)  player can play a slightly different role here relative to the 3-3-2. Given they now have two center-backs behind, they can focus more on finding passing lanes for the wide players, and the lone frontman. The CM is still essential to defense but performs his defensive duties higher up the pitch.

One of my favorite things about the lone front-man formation is the ability to incorporate width and pace. The wide midfielders (LM and RM) can focus more on pouncing forward in transition, with the consolation that they have full-backs covering the wide defensive zones that may be exploited by the opponent.

Various types of strikers can fulfil the forward role in the 4-3-1. I have two favorites: 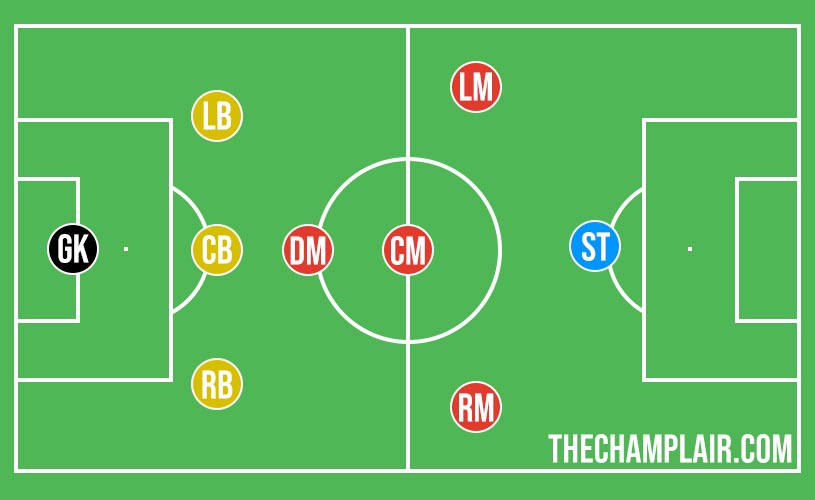 A variation of the 4-3-1, the 3-1-3-1 adopts a back-three with a defensive midfielder sitting on top of them. The 3-1-3-1 allows the midfield three more attacking freedom compared to the 4-3-1, as they can rely on the holding midfield player to cover the back line from the midfield. It also allows the central midfielder to advance during attacks knowing there is a holding player covering the back line.

As with the 3-3-2, the back three opens up room for the opposition to attack with width. However, if the wingers are drilled in tracking back, and if the defensive midfielder is vocal and demands the wingers to track back, the attacking threats can be nullified.

Even more so than the 4-3-1, the 3-1-3-1 allows a coach to utilize attacking talent, particularly if there is a holding player that is comfortable on the ball, and willing to do the dirty work of cutting up opposition play.

Other Useful Soccer Articles
How To Get Scouted For Soccer?
How Was Soccer Created?
Can You Wear Indoor Soccer Shoes On Turf? 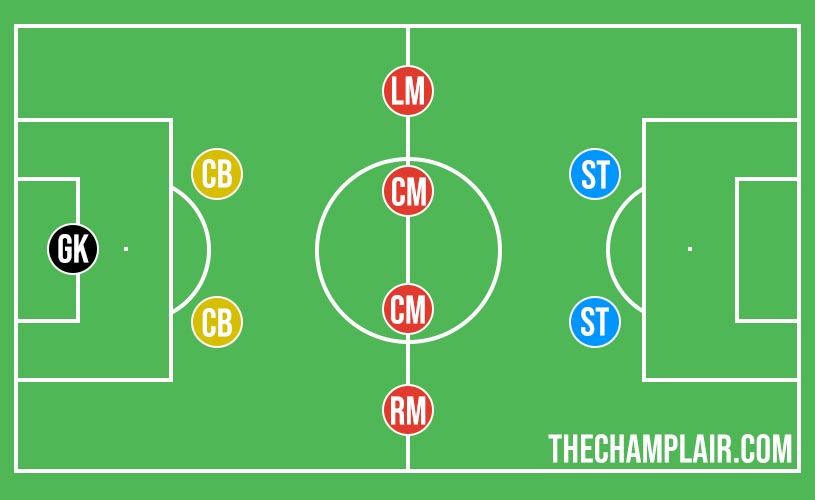 The 2-4-2 is an ideal formation for teams that want to dominate the possession. Overloading the midfield with four players either side of two attackers/defenders, allow teams to retain possession in the middle of the park, and try to cut attacking moves higher up the pitch. This formation requires midfielders who are comfortable and patient with the ball. One-touch play is common in this formation in the middle of the park. The midfielders try to drag the opposition out of position, and create a chance for the two forwards up-front.

While the intention is to dominate possession, the two wide midfielders also have to pay heed to the defensive line when the opponents have the ball. With just two center backs in front of the goalie, the wide-men may have to track back in defensive situations to deal with wide threats, in order to avoid stretching the center backs.

Similar to the 3-3-2, you want your strikers to combine well in a 2-4-2. Think partnerships like Yorke-Cole at Manchester United. In addition, given this formation lends itself to a possession based approach, both strikers must be willing to go deep to support the midfield with keeping possession, and make smart and well-timed runs to take advantage of any openings created by out-of-position opponents. 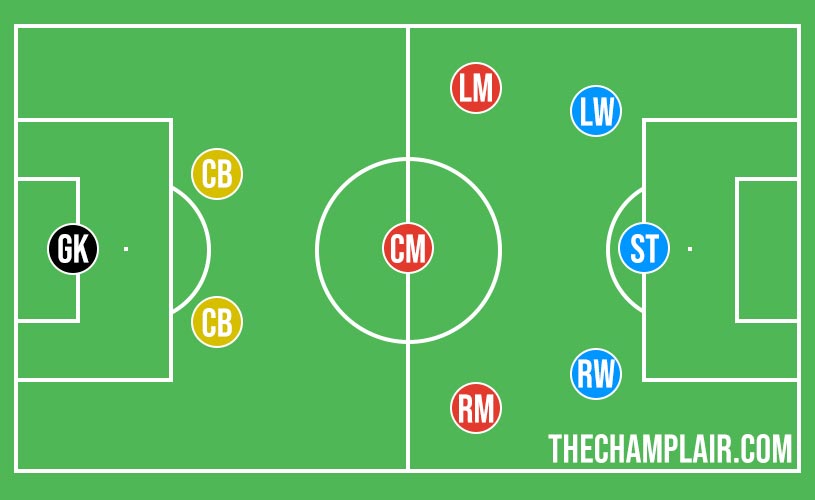 This is an option for a team loaded with attackers, and have an “offense is the best form of defense” mentality. I’m not the biggest fan of this, as I believe defense is an equally important (if not more important) part of the game. However, this is an option when a team is very underhanded in defence, or if they are coming up against a weak opposition where an all-out-attack will give them an advantage.

All three lines of def-mid-att in this formation are further up the pitch. This means that defensive duties are carried out by pressing higher up the pitch and retaining possession. The goal becomes to limit the opponent to their defensive half as much as possible, and run riot when in possession. With 6/9 players in the attacking half, this formation sets itself up for a barrage of attacks.

The central midfielder may have to cover a lot of ground, both in defense and attack due to the advanced positions of the rest of the midfield and the forward line. So you need a player with lots of stamina and the ability to read and intercept opposition play. 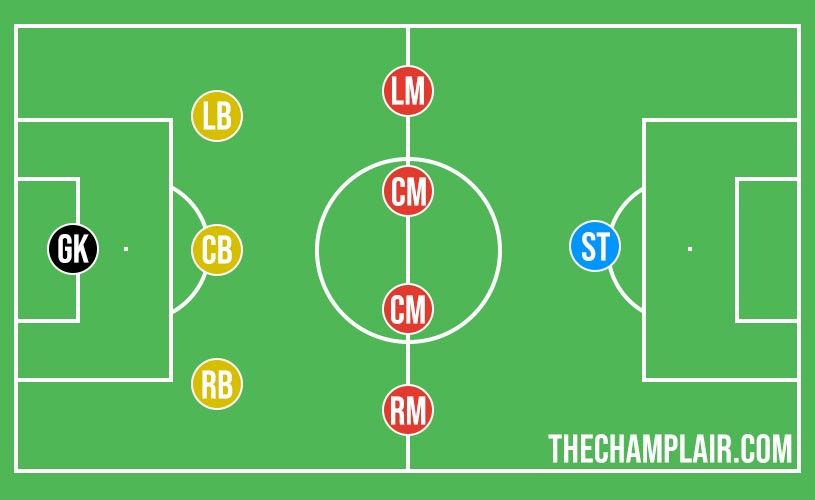 While I would use many of the above 9v9 formations, the 3-4-1 tends to be my default go-to option when I either don’t know the best combination of my team or in the case that I have a good balance of attacking and defensive players. I like a team that’s balanced going forward, and in defending, and I believe this formation provides just that.

In defence, the back line of three can be well covered by the two central midfielders if excessive demands are placed on them. If you have dynamic wide players, they may also help out with defending and cover the wide threats. However, given the two central midfielders defensive cover, the two wide-men can also be a bit more liberal with attacking.

Up front, you can either have a target man, or a more mobile striker, or someone who’s got a bit of both (like a Harry Kane). If you have a pure target man, you can easily play route-1 football with this formation while keeping your defensive shape. If you have someone more mobile, they can interchange with the midfield dragging the opposition defence out of position, and creating space for the attackers.

What I like about this formation is that it’s balanced, but it is versatile. Given a weaker opponent, you can give your wide-men license to pounce forward, alongside the more attacking central midfield player, while leaving behind the other one for defensive cover (it becomes a 3-1-3-1). When you come up against a better team, you can stay compact and maintain your midfield and defensive lines, making it hard to concede many chances. Yes, there is a risk of isolating the front-man in this case, but you can always prepare the team to be alert for the attacking opportunities, even if they are rare.

The 9v9 formations in this version of the game present an opportunity for coaches to inculcate the importance of positional and team play in youth players. Soccer is a team sport at the end of the day; individual progress doesn’t always equate to team progress.

It is therefore essential, to introduce youth players to formations and tactics, albeit gradually, in the 9 v 9 game. There should be education on the variety of different set ups a team can play with, depending on the opponent, or the period in the game, or the squad available to the coach. Some circumstances may require teams to go all out, in which case you can adopt the “all guns blazing” formation. Other situations may require teams to shut up shop, in which case “the lone frontman” 4-3-1 may be the option to go with.