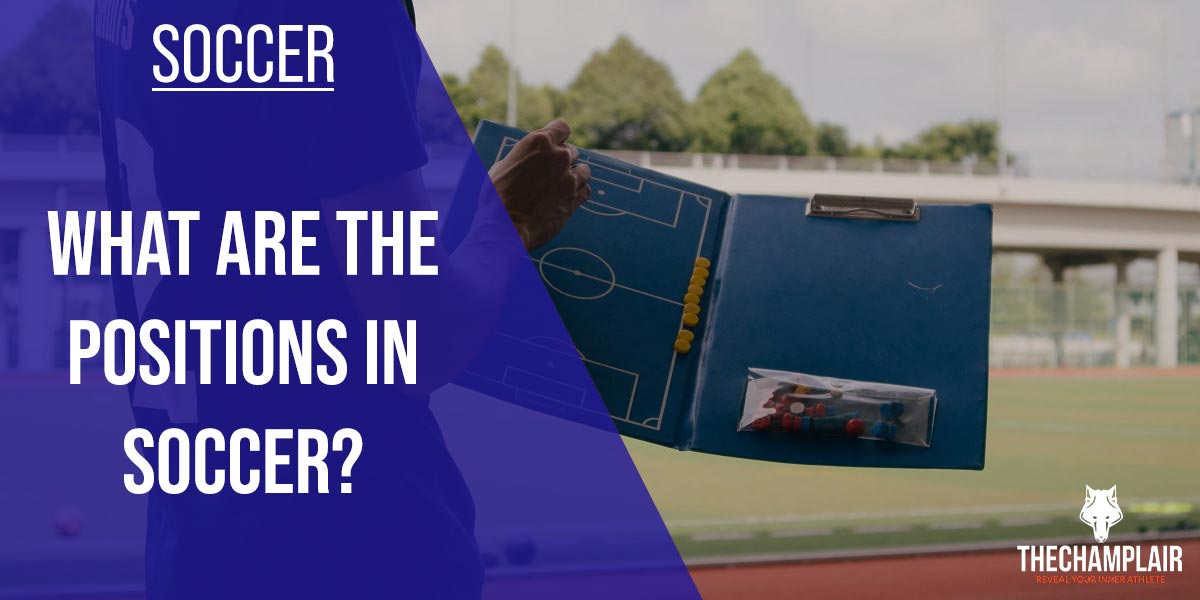 What Are The Positions In Soccer?

Soccer. A fast game that is hard to keep up with.

Especially for us Americans, it can be a little hard to understand what’s going on! While being the most predominant sport in the world, it hasn’t quite reached the same popularity levels here in the States as you might find in Europe or Asia.

A soccer team is typically divided into 11 field positions with three main categories (defenders, midfielders, and forwards), with each player having a defined role during the match. But at the highest levels, soccer can become a very intricate game with a team’s tactics and formations influencing where each player will position themselves on the field meaning it can get a little technical…

But don’t fret! If you’re wanting to watch more MLS or even start playing yourself, this guide will give you the basics of who does what on the soccer pitch. We will cover the different types of soccer positions, what their role on the pitch is, and the physical and technical characteristics required to play in each role.

Let’s kick off and get right into it starting with…

Aaah… The Goalkeeper, first of his name, King of the Box, Lord of the Defense, and Protector of the Goal.

You get it, I like goalies… There’s no one on a soccer field under more pressure than the goalkeeper. There is no such thing as an unforgiving mistake for them and a single slip-up can ruin the whole game.

Goalkeepers are the only player allowed to use his/her hands within the box to defend the goal. Plus goalies will also wear a different color kit from the rest of the team, to tell them apart, and will usually wear a pair of gloves to help protect their hands.

The Left & Right Fullbacks – Numbers 2 and 3

Let’s get something out of the way, a full back is first and foremost a defender.

Also known as a “right back” and a “left back”, not because they’ve been ‘left-back’ in the changing rooms… But because they typically provide support either side of the central defenders in a 4-man backline formation. They will mark and cover attackers coming in off the wings towards the box.

As one of the most skilled soccer positions on the pitch, the fullback must be able to read the game, knowing when to get forward and attack or when to drop back and defend. But it’s important to remember that their first job is to defend and support their center backs.

Defensively they must be quick on their feet to track and tackle players, but when in control of the ball they need to be able to break and deliver some killer crosses into the box.

This is where soccer gets technical.

A wingback is a slightly more attacking version of a fullback and will play usually in teams operating a 3-man backline formation, as opposed to a fullbacks 4-man backline.

As soccer has become a faster game, the modern-day role of the fullback has evolved to become a more attacking presence on the pitch.

This has revolutionized the way soccer is played. If you’ve ever watched Premier League teams like Liverpool or Manchester City, their full-backs act like extra wingers, sitting high up the pitch and break forward quickly to whip killer balls into the box.

The key characteristics of a good wingback are:

A great center-back may never know glory. Do you know how rare it is for a central defender to win the “Ballon d’Or”?

Defenders are not often the stars of the show, but they are the spine of the team, and having a solid defense is what wins championships.

An excellent center-back relies on their ability to read the game to identify and eliminate an offense’s attack to stop the threat before it gets close to the goal. These unsung heroes are confident, physical, and can stop attackers while also having great reactions to quickly clear dangerous goal-line situations. Whether on the ground or in the air, a center back is a dominant force to be reckoned with.

Natural defenders should be:

As of the most versatile soccer positions on the pitch, you will come across many different types of midfielder, but here are the main three you should know about:

Another unsung hero of any soccer team.

Akin to a center-back, your typical defensive midfielder is strong in defense but also has great soccer skills. They are also one of the fittest players on the pitch, having to cover a lot of ground to support attackers, but also drop back to defend when needed.

In a nutshell, they are a sweeper. Sitting behind the central midfielders, their key job is to break up any opposition attacks coming through on goal, regain possession, and redistribute it to one of the team’s attacking players, so that the team can counter-attack quickly. If you ever wanted to see a great holding midfielder in action, take a look at Claude Makélélé’s highlights reel.

The best defensive midfielders should be:

Playing in central midfield is arguably the hardest position on the pitch. They are the powerhouse of the side but can also be one of the most creative and influential roles on the pitch depending on what sort of midfielder you are.

For example, a box-to-box midfielder flies from one end of the pitch to the other, shutting down opposition passes, winning the ball back, and playing passes forward to their attackers.

You also have the deep-lying playmakers, also known as the “Regista.” Regista in Italian translates to ‘director’ and similar to your Tom Brady, these guys orchestrate the show. A good Regista will sit deep, look for space, and will deliver killer passes to attackers making a break on goal.

Also known as the “Trequartista”, translating to the ‘third-tier specialist’ in Italian. They primarily sit high up in the final third of the pitch, or what’s commonly known as the ‘hole’ occupying the area behind the striker.

As the creative link behind the attack, their job is to either deliver killer passes that rip defenses apart, enabling their attackers to get through on goal, or even have a shot at goal themselves.

Key attributes of a great trequartista:

Fast and full of flair. These guys are the stars of the show.

A winger is typically the most skillful player on the pitch, with excellent footwork and skills to pay the bills. Take a look at Christiano Ronaldo if you needed an example of the perfect winger. Dribbling past defenders, fizzing crosses into the box, and scoring wonder goals.

Well, combining speed, control, and decision making all at once is no mean feat. That is why the top wingers like Ronaldo get paid the big bucks. A good winger can change the game in minutes either by setting up a goal or scoring themselves. That’s why they are an integral part of any team.

A great winger must be:

Having a good defense might be the most important part of building a great team. That’s true. But to win games, you need to score goals!

It is almost equally important to have an out-and-out match-winner ready to convert chances and score great goals.

There are a couple of different types of strikers, but each must have a good eye for goal.

Typically the Centre Forward will sit high up the pitch and will make darting runs into the box to unsettle defenders, in order to break the defense apart and score goals.

A good center-forward is physically strong and acts as a target man. Their great aerial presence in the box, allows them to win contests against opposition center-backs and head in goals.

Aside from being physical, they also need to have an explosive turn of pace, to break the defensive line, collect a pass, and take a shot on goal. It is a hard skill to master, but a world-class center-forward, who can bag your team 20 goals per season is priceless.

Unlike a center-forward, the false 9 drops back, sitting away from the defensive line. This allows them to receive the ball in space, with an aim to pull defenders out of their line, to either play killer balls into other attackers in space, or have a pop at goal themselves.

A great false 9 has to be decisive and know when it’s right to pull the trigger and shoot or play a pass into a teammate through on goal. They are technical geniuses with the ball at their feet but don’t give them too much space the best false 9’s can also shoot from long distance.

Top traits of a false 9 are:

The ‘beautiful game’ is played all over the world by many different people in the streets, on beaches, and in huge stadiums. One of the great things about soccer is that it offers something for everyone, whether you’re small and fast or big and strong there’s a position for all!

So if you want to lace up your boots and start playing, or are looking to support a new team, you will now hopefully have an idea of the different soccer positions on the pitch and some of the tactics associated with each position.

One thing’s for certain though, soccer is an ever-changing game, with coaches thinking up new and exciting positions all the time. So make sure you come back in a few years to see if we’ve added any more new soccer positions onto this list!