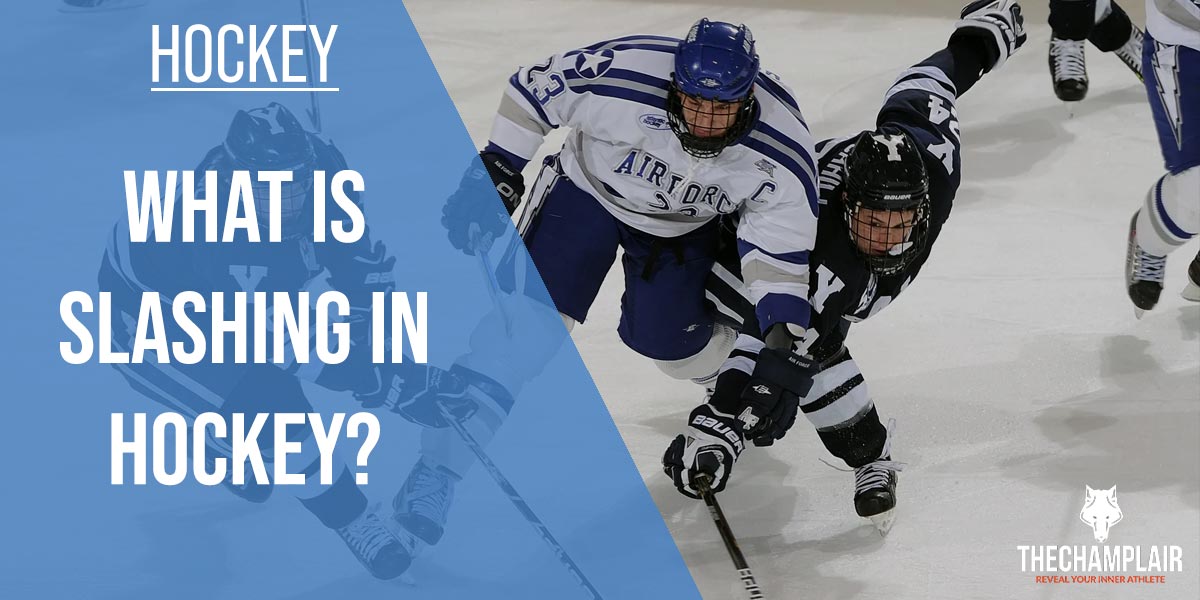 What Is Slashing In Hockey?

Slashing has been particularly enforced in 2017 when the NHL asked referees to be more strict about this infraction. With that, slashing is one of the most important rules and concepts to understand in today’s hockey.

What also makes matters worse is that slashing is fairly easy to commit, especially if you are new to the game.

Today, we are going to look into slashing in hockey and try to understand what it is.

What Is Slashing In Hockey?

According to both rulebooks, slashing is when a player swings his stick at an opponent, whether or not actual contact with the opponent occurs.

Referees may call slashing when the player makes a forceful chop on the body or stick of the opponent, as well as on or near his hands when there is no attempt to play the puck.

According to the USA Hockey rulebook, referees are instructed to penalize players who swing their sticks at an opponent or swing wildly at the puck to intimidate the opponent.

According to the NHL rulebook, non-aggressive contact of the stick with the opponent’s pant or the front of the shin pads shouldn’t be penalized as slashing. Some people find this controversial because referees seem to fairly rarely penalize swinging at the legs as slashing.

USA Hockey brings a couple of video examples to demonstrate slashing. Have a look at these to get a better idea of what slashing is:

USA Hockey also has a couple of example situations in the slashing casebook for further demonstrations.

In practice, slashing seems to be more commonly penalized when the edge of the stick is involved rather than the sides.

Slashing is fairly easy to make accidentally, especially among less experienced players. However, by just keeping the stick on the ice, you should be able to avoid slashing.

There is no point in lifting the stick off the ice to begin with, so by just ensuring that the stick is planted on the ice, you will avoid being penalized – or at least, you will reduce the chances of getting called for slashing.

How is slashing penalized in hockey?

In most cases, slashing is punished with a minor penalty. However, when slashing results in an injury in the opponent, a major penalty plus a game misconduct penalty is to be assessed.

Referees may also assess a match penalty if a player attempts to or does deliberately injure an opponent.

For stick contact with a goalkeeper while the goalkeeper is in his goal crease and has caught or covered the puck, a minor penalty is to be assessed no matter if the referee had stopped play or not.

In certain cases, the team of the offended player will be awarded a penalty shot or a goal. These cases are defined by Rule 57.3 and 57.4 of the NHL rulebook:

How do referees indicate slashing?

Referees indicate slashing by sticking one arm out and making a chopping motion with the other arm across the first arm’s forearm.

In 2017, the NHL asked referees to more strictly enforce the rules of slashing. The reason for this were the frequent hand injuries as a result of slashing. Not only that, but because some referees enforced slashing more strictly than others, there were some inconsistencies and confusion as to what slashing truly was and when it should be called.

After NHL’s 2017 crackdown on slashing, referees began to more closely watch slashing. And interestingly, this enforcement increased the average number of goals per game in the 2017 season – up to 3.04 goals per game.

The reason for the increase in the average goals per game is that players became more apprehensive about using their sticks in defense.

In the 20 years prior to the 2017 season, the average goals per game exceeded 3 only once – in 2005-2006 when the NHL significantly changed some rules to open up the game.

So there you have it!

Slashing is fairly easy to understand and perhaps as equally easy to commit. Be careful on the ice and keep your stick low to reduce the chance of committing this infraction!