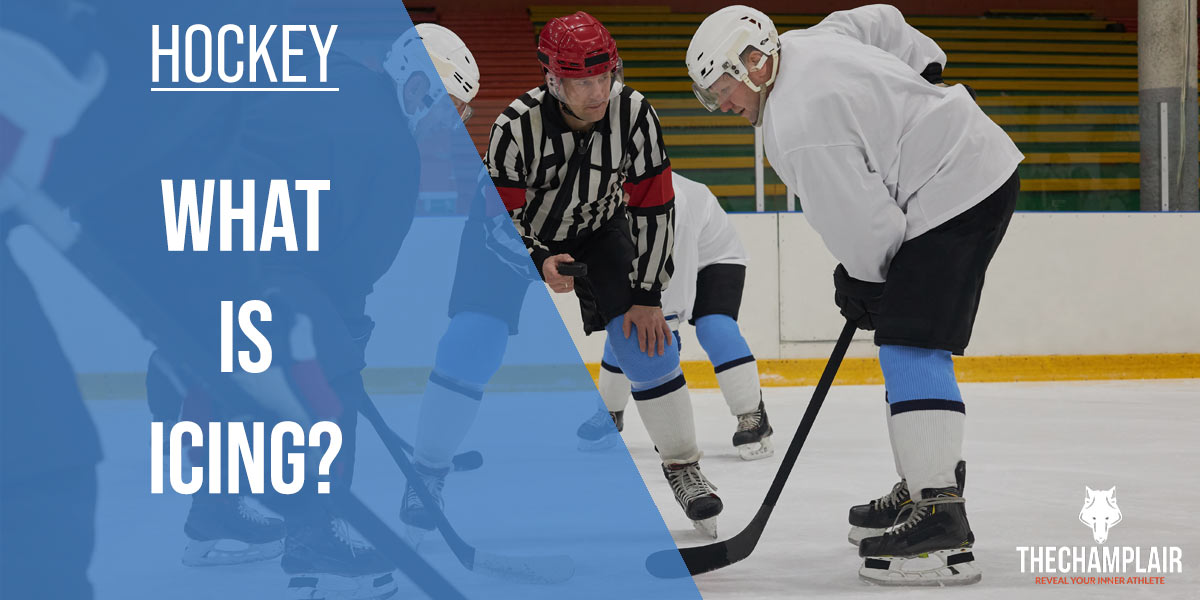 Who doesn’t love skating on ice? Although famous hockey players like Jim McKenny left the rink years ago, they still can’t deny their passion for the thrill of the game. If you’re a newbie to hockey, however, it’s no surprise the rules intimidate you. Naturally, I see a lot more fouls surface from rookies in my coaching sessions. And if you have no idea about the rules for icing in hockey, I’m sure you hit the bench a few times over already.

Here’s what you need to know.

What Does Icing in Hockey Mean?

The easiest way to avoid an icing penalty is to understand what is icing the puck. It’s not complicated. How about we highlight the ideal definition of icing in hockey with this diagram. 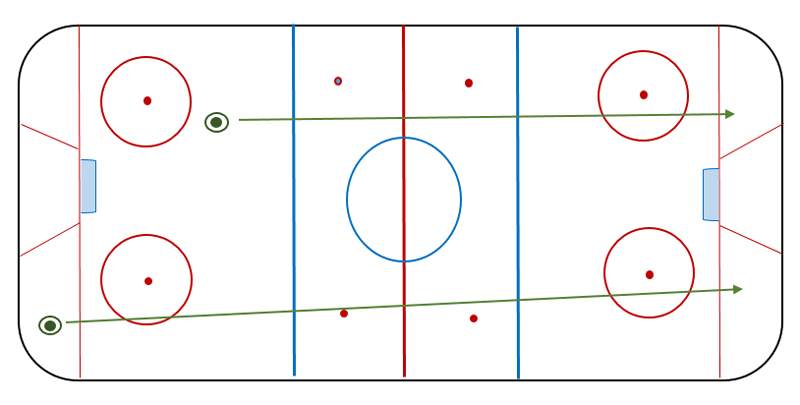 Every game consists of two teams, each with their corresponding goal. The centerline truly determines if a player attempts to ice a puck or not because it marks his position.

In simple terms, icing occurs when a player stands on his side of the rink and shoots the puck down beyond his opposers’ goal line. What’s the big deal? Hockey isn’t about seeing how far you can pitch your puck from one end of the ice. Most people won’t bother wasting their time to look at that on a sports channel, let alone pay to watch it in real-time.

Don’t just take my word for it. Check out what Snoop Dogg says in his “What is Icing in Hockey” video.

When it comes to specifics, different leagues accept different definitions of icing hockey. Your play could either fall under touch icing, automatic icing, or hybrid icing.

Touch Icing holds to its name. It’s not icing unless an opposing player touches the puck.

Automatic plays make how icing is called in hockey less complicated. You might also hear fans refer to it as no-touch icing. Here, the referee blows the whistle as long as the puck leaves the player’s side of the rink and lands past the opposers’ goal line. As you can imagine, this happens more frequently within lenient amateur leagues.

In NHL hockey, referees are more on the look-out for what we call hybrid icing. Initially, defenders needed to contact the iced puck before any offenders to call it officially. Circa 2013, the NHL changed the rules after viewing the frenzy caused when racing for the puck. Instead, officials will only consider it icing if a defending player reaches a face-off dot before his opponent.

The AHL and IIHL since then go by similar rules for hybrid-style infringements in their games.

Rules for Icing in Hockey

The point is, you have to move; keep the game going. Whenever someone ices the puck, that’s time lost for a delightful play.

As of 1937, NHL officials placed a penalty for hockey icing to avoid to improve the quality of games. At the time, it was a common strategy for NHL players to ice the puck whenever they had a lead yet figured the game was about to get tied up. As long as they stood a chance of winning, players would attempt to run down the clock without playing defense.

What’s the penalty? A face-off where the defending team gets the opportunity to score points from the goal-end of the offenders. The proximity of the players likens their chances of actually scoring a goal.

Even so, players used the icing rule to switch lines whenever defenders remained on the ice for too long. In response to the loophole, in 2005, the NHL amended the law so that the same players in the rink at the moment of the icing offense would have to defend for that very face-off, no matter how tired they are. The defenders, on the other hand, can still change players after the whistle blows. The offending team would often play against stronger, more energized opponents who have the upper hand at winning those points.

As a result, there have been far fewer icing incidents in the last few years.

Although the icing hockey definition is clear, there still exist exceptions to the rule. For instance, if a team gets shorthanded on players in a penalty kill, the opposers are at an advantage. For one, their goal is more vulnerable, and the overwhelmed players are less likely to guard their side adequately. The referee allows the team in the penalty box to ice the puck without further repercussions. In that case, two things happen:

Aside from this, not all attempts at icing are successful. If the referee notices that the defenders stood a chance at tackling an iced puck yet let the opportunity slide, then the whistle won’t blow. Overall, the most critical issue is engagement. If players refuse to chip in enough effort, that’s a problem.

You also can’t score on an iced puck. If it happens to enter the goal, the referee will deem the offense unwarranted. Nor can you attempt to ice during a face-off. That same tactic got you into a face-off in the first place.

The United States may not approve of this one, but if the goalie leaves his post and motions at the puck, that disregards the icing as well.

Compromises to the Game

There’s always some bend or twist to a law. In recent years, players manage to “almost ice” their pucks mid-game. The trick is to hit the puck into the air so that there isn’t enough force or velocity to get it across the goal line by the time it touches back on the ice. What it does allow, however, is enough distance to get opposing players away from your defense zone—a perfect distraction in perfect timing.

Offside vs. Icing in Hockey

One significant difference between offside and icing offenses is the position of the player. In an offside infraction, the player completely crosses into the opposer’s attack zone before his puck. Once he prematurely enters over that blue line, the game delays.

Similar to icing, offside violations carry their scoring consequences for the respective teams.

How many players are allowed on the ice in hockey?

Although each can have as many as 20 players assigned, only six will play on the ice at any given time. Typically, one goalie, two defensemen (left and right), and three forwards (left, right, and center wings) are present for every game, unless a penalty kill occurs. In that case, the team will be shorthanded for at least ten penalty minutes.

How long do hockey players stay on the ice?

On average, hockey players remain on shifts that are just 45 seconds long. The actual time-span varies based on the position of the player. For example, defensemen may last longer on the ice for a single shift. In times past, players do manage to stay on for up to a minute.

It may not seem like a lot of time, but players’ performance can quickly diminish while on the ice for too long, not to mention the fact that hockey is a highly energetic game. Your mental stamina must be on point throughout the play if you plan to score any reasonable goals.

In any case, players have to weigh out factors like convenience and strategy before switching out of the ice.

Can a goalie get called for icing?

If a goalkeeper shoots the puck from his position down to the opponent’s goal boundary, that’s also an icing offense. As long as players remain on their side of the rink and successfully shoot across, the referee will most likely call it.

Can you touch the puck with your hands?

If you happen to catch the puck in your hand, drop it onto the ice immediately. Skate along with it but beware: you risk getting a penalty for closing your hand over the puck.

Why do hockey players get kicked out of face-offs?

Puck It Or Pack It

You have to admit; the rules are undemanding. Play a good game, make the crowd go crazy, or risk a win with a penalty on the bench.

Truly, hitting a puck doesn’t make the headlines – strategy does.