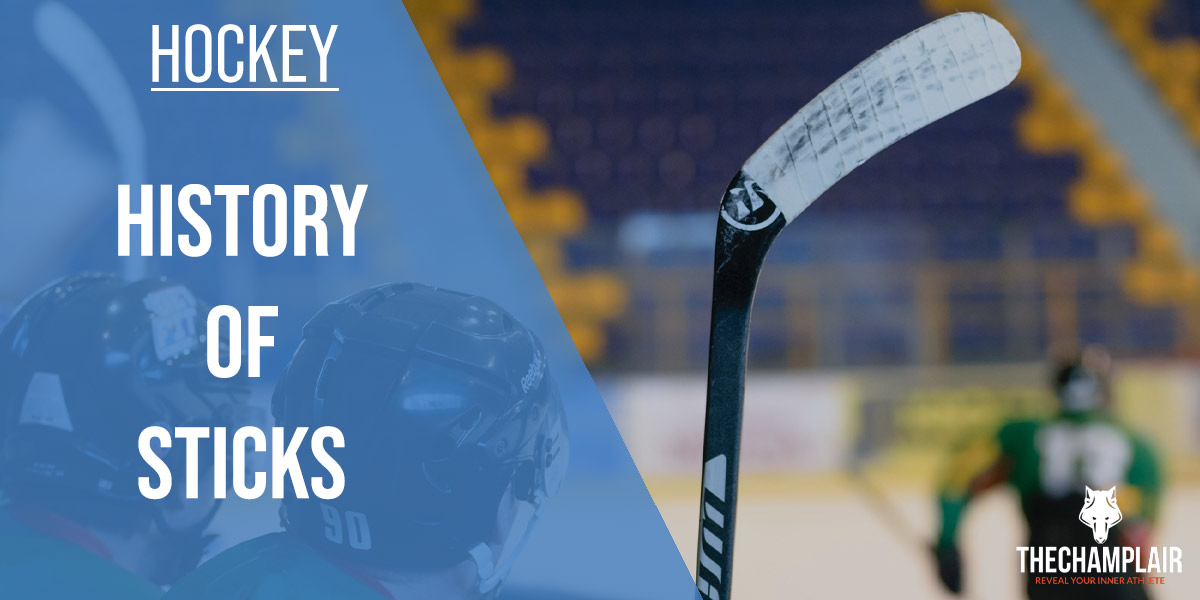 The Evolution Of The Hockey Stick

It takes decades and centuries of effort to advance technology – hockey sticks are no exception.

Though hockey sticks haven’t changed fundamentally since their invention, hockey gear manufacturers have made many small tweaks here and there to hopefully bring them to perfection.

Today, hockey sticks are better than they have ever been, but we will likely see even further advancements in the coming decades.

In this post, I’d like to introduce you to the history of hockey sticks to celebrate the thought and technology put into them.

The origins of the hockey stick

It’s believed that the hockey stick and hockey itself have been invented in the mid-1800s by the Mi’kmaq (also spelled Micmac) tribe – Native Americans who lived in Atlantic Canada.

The earliest hockey sticks were made from Hornbeam and Birch trees. Hornbeam was particularly prized for its strength and is often called “ironwood.”

These sticks were carved out of one continuous wood piece, unlike modern layered designs, and resembled modern field hockey sticks. They had straight blades as well – curved designs would not become popular until the mid-1900s.

Some of the earliest hockey sticks have reached our days. In 2006, a stick made between 1852 and 1856 was sold to an anonymous buyer from Canada for $2.2 million. Later, the stick was valued at $4.25 million. Back then, this particular stick was the oldest known hockey stick.

As of January 2021, the oldest known hockey stick was made in the mid-1830s by William “Dilly” Moffat, though some think Mi’kmaq had originally carved this stick.

The hockey stick in the early 1900s

A deficit of hornbeam caused by the wood’s popularity in many applications forced hockey stick manufacturers to seek alternative materials. For some time, yellow birch and ash were used as a replacement. However, by the 1920s, the ash had become the preferred wood for hockey sticks.

Around that time, Canadian hockey brand Hespeler came up with a two-piece hockey stick design. In this design that would be eventually patented, the blade was affixed to a wooden joint and then glued to the shaft.

In 1927, Cy Denneny, a forward of the Canadian Ottawa Senators, curved his stick blade akin to modern designs. However, the new design didn’t gain popularity because of Denneny’s allegedly unpredictable knuckler shots. 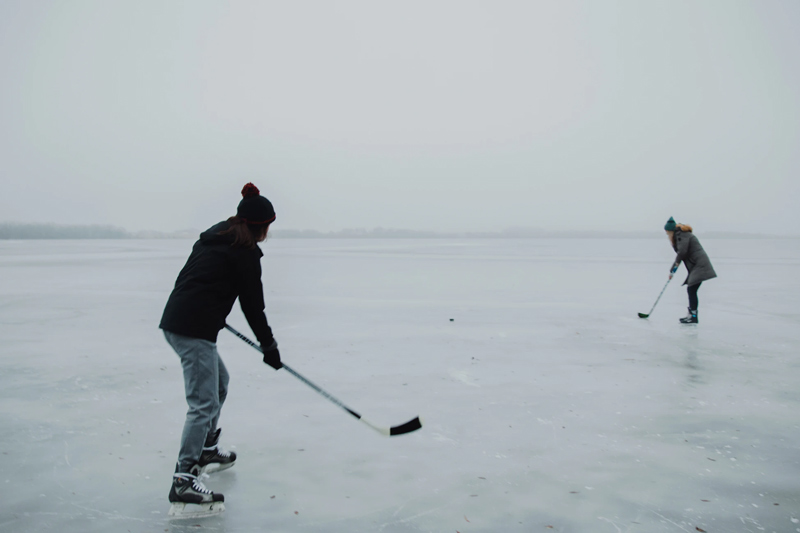 Major design advancements in the mid-1900s

Ash hockey stick designs would stay relatively unchanged up until the 1950s. In the 50s, companies like Canadien and Sher-Wood began experimenting with fiberglass-wrapped blades. This allowed manufacturers to start making blades from the lighter aspen rather than ash, which considerably reduced hockey sticks’ weight.

The next significant advancement in hockey sticks was the popularization of curved blades. Although not a new concept, the curved blade was popularized by Stan Mikita of the Chicago Blackhawks.

According to the NHL, Mikita discovered the curved shape’s benefits accidentally after breaking his stick during practice with teammate Bobby Hull. Mikita took a shot with the curved/broken blade and was intrigued by its feel.

Hull and Mikita continued to experiment with curved blades and started to use them in games – to the dismay of goaltenders. The curved design allowed hockey players to shoot harder and lift the puck more easily, contributing to the curved blades’ popularity and accelerated their adoption.

Slight design changes in the 70s and 80s

Curved blades increased shot velocity but decreased control. Thus, the NHL limited the curves of hockey stick blades – to 1 inch in 1969-1970 and 1/2 inches a bit later.

In the 1970s, one of the most popular sticks in hockey’s history emerged – the Sher Wood P.M.P. 5030. This stick featured an aspen core shaft with multi-layer birch lamination along with a fiberglass-covered white ash blade.

Although quite an archaic design by nowadays’ standards, this stick offers delightful performance even today. This is thanks to its puck feel and exceptional durability, though its poor response and heaviness may repel some players.

Around the time of P.M.P. 5030’s introduction, Sher Wood and Canadien dominated the hockey market. But in the 1980s, companies like Koho and Titan made an entry into the industry, gaining considerable traction in the coming years.

The popularization of aluminum hockey sticks in the 90s

In the 1980s, baseball and cricket bat manufacturers started experimenting with manufacturing materials other than wood. The interest toward alternative materials was picked up by hockey brands and gave birth to the first hockey stick made of aluminum in the 80s. However, this one-piece stick lacked puck feel and thus didn’t gain much popularity.

To improve the feel of the stick, manufacturers came up with a two-piece design with aluminum shafts and wooden blades. This mix combined the sturdiness of aluminum with the feel, cheapness, and replaceability of wooden blades.

What was also particularly notable about aluminum is that it could be manufactured with consistent flex and weight distribution.

Aside from the technological superiority, what also gave traction to the aluminum design was the endorsement deal between Easton and Wayne Gretzky, nicknamed “The Great One” and considered the greatest hockey player ever. As per the deal, Gretzky was to use the Easton HXP 5100 aluminum-shaft stick on the ice.

With that said, even these improved aluminum sticks had an inferior feel compared to fully wooden sticks.

Two-piece composite designs in the 90s

Composite hockey sticks came shortly after aluminum ones to address the lacking feel. The very first composite hockey blade was introduced in 1995 – it was adopted by the likes of Paul Kariya right away. With the new blade tech, Kariya scored 50 goals within a season a few years later.

One-piece composite designs in the 00s

One of the latest advancements in hockey stick technology is the introduction of one-piece composite sticks.

Thanks to its one-piece design, Easton Synergy finally mimics the feel of all-wood hockey sticks. And as one-piece composites gained recognition in the sport, other companies quickly followed Easton’s steps by introducing their own models.

Some of the models that emerged in the early years of the adoption of composite sticks are: 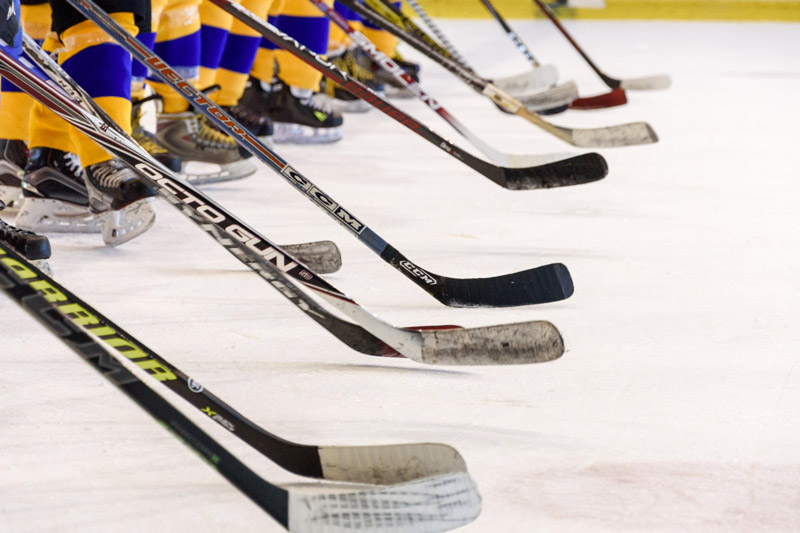 The evolution of the hockey stick has been accompanied by many changes in design and technological advancements. Below is a brief timeline of hockey stick design starting from the 1800s and ending with today.

Who invented the hockey stick?

The Mi’kmaq people may have made Moffat’s stick in the 18th century. The Mi’kmaq tribe is also considered to have invented hockey itself.

When was the first composite hockey stick made?

Who invented the curved hockey stick?

It’s thought that the first athlete to experiment with bent blades was Cy Denneny,
a forward of the Canadian Ottawa Senators.

However, the curved blade would not become popular until the days of Chicago Blackhawks legend Stan Mikita.

Mikita discovered a curved blade’s benefits accidentally after taking a shot with a broken blade during practice.

Hockey sticks have seen dramatic improvements since their invention, and we’ll likely see even more advancements in the future.

With that said, what’s particularly interesting about hockey sticks is that old wood hockey sticks are very hard to beat in terms of feel. It took decades of investment and effort to finally come up with one-piece composite sticks to match the old-fashioned wooden ones. And I think that there’s still a lot to be done to make hockey sticks even better.