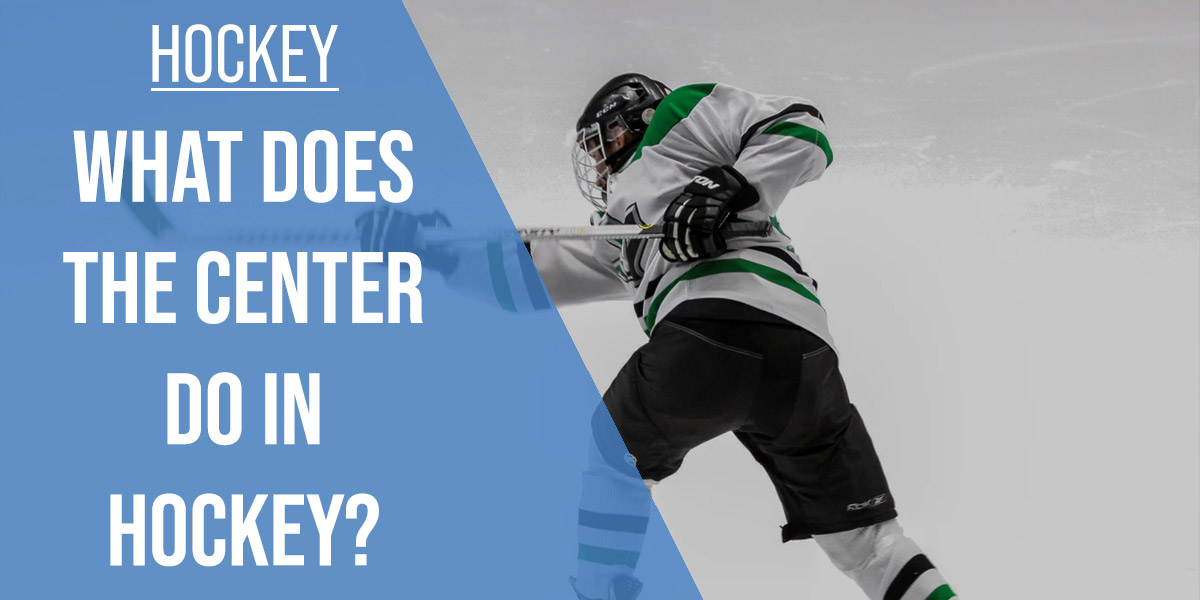 What Does The Center Do In Hockey?

Creatively named, the center in hockey occupies the middle of the rink. The center is central (sorry, had to be done) to the game. The player in that position has several responsibilities, whether in the offense, defense, and in transition.

The center occupies the middle position in the forward line, flanked by two wingers on each side, with the two defensive players behind him (also on either side). Hockey’s dynamic nature requires each player to have both offensive and defensive responsibilities.

The speed at which the game takes place necessitates quick transitions between those responsibilities and the role of the center is a great illustration of that.

The center’s defensive role is supportive in nature. That is, they typically position themselves in between opposition players, and try to cut out passes, rather than go for the puck directly. There is one exception to this, and that’s when the puck is coming directly through the middle of the rink.

If the opposition is either carrying the puck through the middle, or a pass from the side is made to the middle of the rink, the center attacks the player in the middle with the puck, and will try to block any incoming shot, or will attempt to force a turnover via a check.

The center’s positioning will therefore naturally change depending on the position of the puck and where the opposition players are. The general idea still remains, they skate around the “middle” zone blocking passing and shooting lanes and remaining open for the defense-men.

In the event of a turnover, the defense-men may look for a passing opportunity for the center, if they have positioned themselves well, and transition into offense.

Winning face-offs is both an offensive and defensive move. The center is tasked with winning the puck during the face-off. This usually requires good stick skills and awareness of team-mates’ positions.

Winning a face-off in a team’s defensive zone can allow the defenders a breather, especially in a short-handed situation, where they can just punt the puck forward. On other occasions, it can be a great start to an offensive move allowing the team to rush the defending team.  In either case, winning face-offs are an important part of hockey and the center is solely responsible for them.

As with defense, the center’s offensive role is also supportive in nature. Centers usually get the most assists in games, as they pass the puck to the wing-men who usually lead in goals.

In an offensive move, if the center does not have the puck, they’ll usually occupy the “middle-zone” and try to get open to receive the pass from the winger. Upon receiving the pass in the offensive zone, they may look for the other winger if open, or in some cases, pass back to the defense-men on either side.

Another offensive responsibility for the center is in transition. In their defensive role, centers try to support the defense-men by staying open in case of a turnover.

If a turnover happens, and the puck is passed to the center, they may carry the puck into the offensive zone, and hope for an opening from one of the two wingers on the side in case of an odd-man rush (hockey term for the forward line in the offensive team outnumbering the defenders).

The center’s positional awareness is key in these instances; they need a 360-degree view of the rink and should constantly be looking around them to track team-mates’ and opposition players’ positions.

Generally, the center is a fulcrum in the offensive operation, they find spaces in between the defense, and try to open up for a pass.

In cases where they carry the puck into the offensive zone (see image above), they typically try to find an open winger for either a shooting opportunity or an assist to the other winger.

Other Useful Hockey Articles
Best Goal Horns In NHL
What Is Charging In Hockey?
Most Saves In An NHL Game

What are the top skills I need to have if I want to play center in hockey?

How do I get better at winning face-offs?

I liken the face-off to set-pieces in soccer. Where you actually have an opportunity to apply a training routine. A few tips on improving your face-off play

Is there a sole-defense or a sole-offense position in hockey?

I’d say the only one is goalie, where 99% of your job is to stop the puck from going into the net.

You may on occasion start an offensive move from the back, but that’s rarely required. Given the size of the rink, and the fact that there are only 5 non-goalie players, you’re probably going to have both offensive and defensive responsibilities in a game if you’re not a goalie. Now, the portion of these may change game-to-game, and based on the strategy, but in a general sense, you’ll have to do both.

The center is a great example of this. Even though they occupy a position in the forward line, they actually have a lot of defensive responsibilities. This is in stark contrast to a center forward in soccer, for example.

Hockey’s dynamic nature requires players (besides the goalie) to play both offense and defense, and seamlessly transition between the two multiple times during the game.

You could be covering an odd-man rush one second, and suddenly receive the puck, and be looking for a breakaway pass. If you’re a winger, you may be in the offensive zone and a turnover suddenly forces you to track back and cover the opposition winger.

The intense speed of the game necessitates players to function in multiple roles and be able to smoothly transition between these roles.

The center tends to be absolutely essential to this. They are the engine of the hockey team, responsible for taking faceoffs, providing assists to the wingmen, providing defensive cover to the defense-men, and generally occupying the middle part of both offensive and defensive zones.

It’s a tough position to play, but there’s no easy position in hockey! If you have the right combination of stick skills, passing, skating, and positional awareness, it could be the right position for you.