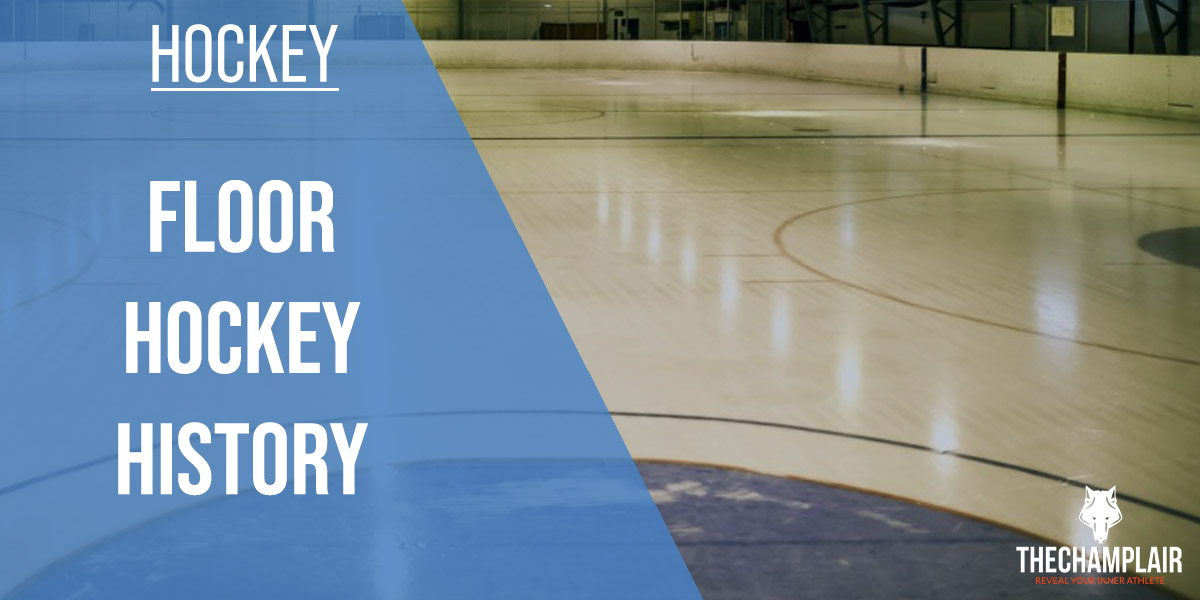 Ice hockey is by far the most famous form of hockey, but it’s not the only one. Many other hockey styles have emerged after the invention of ice hockey, including field hockey, street hockey, and floor hockey.

Today, my focus is on floor hockey. Who invented floor hockey? And why did sports associations even decide to come up with this sport? Find the answers in my floor hockey history overview below!

Compared to ice hockey, floor hockey is rather poorly documented, and there isn’t much information about its history online. Nonetheless, I’ve managed to dig up some info about the creation of floor hockey.

Floor hockey in a more or less modern form is thought to have been invented by Sam Jacks, the assistant physical director at the West End YMCA, Toronto, in 1936. Jacks codified the first set of rules, which apparently is an achievement recognized by the United Nations.

Over the following years, Jacks would encourage children to use natural outdoor space to exercise and play hockey. He would also start experimenting with a version of hockey for girls. This girls’ hockey version was finalized in 1963 and today is known as ringette.

In the United States, floor hockey rules were developed in 1962 by Tom Harter, director of Recreation in Battle Creek, Michigan. Harter’s variation of floor hockey combined ice hockey and basketball rules, but it placed a heavier emphasis on playing the puck. Body checking was forbidden as well, making the game much safer than ice hockey.

Floor hockey was originally adapted from ice hockey for play on streets. Initially, modified ice hockey equipment was used during games, but it soon showed to be inadequate for street use. In 1963, several sports brands introduced plastic sticks and pucks to withstand indoor and outdoor use.

There also are variations that are played on foot – these are often used for training children to prepare them for ice hockey. One could consider ball hockey – where players play a ball instead of a puck – as a type of floor hockey.

After the introduction of the first quad skates in 1863, many sports incorporating this piece of equipment emerged, including roller hockey. The oldest known recorded roller hockey game was held in London in 1878.

Nowadays, international competitions in roller hockey and other roller sports are governed by the International Federation of Roller Sports.

Other Useful Hockey Articles
Best Street Hockey Sticks
Gift Ideas For Hockey Players
Why Are There 3 Periods In Hockey?

Inline roller hockey appears to be younger than quad roller hockey. Inline rollers have been used in hockey since at least 1938, when they were featured in newsreel footage taken in Vienna, Austria.

However, it was not until the 1990s that inline skates became widely available and popular.

Roller sports in the US are governed by USA Roller Sports. The predecessor of this organization was the Roller Skating Rink Operators Association (RSROA).

In 1940, the RSROA published a collection of roller hockey rules. These rules were adapted from an NHL booklet. The RSROA came up with roller hockey to grow the interest in playing hockey on roller skates. But due to WWII, roller hockey would not see significant development until the late 1940s.

Initially, interest in roller skate hockey was limited to the US’s northern tier and bordering Canadian cities. But it would not take long until roller hockey began to spread throughout the nation. Local commercial television, which had been established recently and was looking to fill air time, played a significant role in the spread of roller hockey.

The increasing interest in the sport led to the formation of a National Puck Hockey Committee in 1959. The goal of the committee was to come up with special rules for puck hockey. The American Roller Hockey association was formed as well under Joe Spillman, its first Commissioner. Thanks to Spillman’s effort, roller hockey spread quickly across the US.

Exhibition games for ball and puck roller hockey were held during the RSROA National Roller Skating Championships in Little Rock, Arkansas, in 1960. This event was followed by the first full competitive season for roller hockey in the United States.

Back then, inline rollers skates weren’t commercially available, so quad rollers would be used for quite some time in this sport.

On September 1, 1965, the RSROA designated puck hockey as an equal and separate roller hockey division (which included ball hockey). Ball hockey and puck hockey were decided to compete under the same rules and have respective gold medal winners.

Around these years, roller hockey continued to gain popularity across the United States. The 1966 North American Championships were particularly acclaimed among viewers for their fast pace and excitement.

The 1977 North American Puck Hockey Championship in Houston, Texas, gathered large crowds and enjoyed publicity thanks to coverage in 14 newspapers and TV stations. 1977 also marked the debut of a women’s hockey national championship.

As for inline skates, it would take another decade or two for them to become popular among professional players. By 1992, some teams and players had already had inline rollers, but they hadn’t quite mastered them yet.

The very first inline roller hockey team to win a USA National Championship was San Diego Hosers in July 1993. In the 1992 nationals, the Hosers had won the Senior Gold Division on quad roller skates. Still, they decided to switch to inline roller skates due to their increased speed and assumed greater maneuverability.

After that, inline hockey would become even more acclaimed. In 2002, USA Roller Sports was reaffirmed as the governing body for inline roller hockey in the US by the USOC Membership and Credentials Committee. Additionally, in 2005, inline hockey was introduced to the World Games, an event sanctioned by the International Olympic Committee.

Why Was Floor Hockey Created?

Floor hockey appears to have been created to provide professional and amateur athletes alike with a safer alternative to ice hockey. Although injuries are still possible in floor hockey, due to the unique rules limiting or forbidding body checking and the absence of sharp blades, it’s noticeably less risky than ice hockey.

Floor hockey has been particularly popular among children thanks to its added safety as well.

Floor hockey doesn’t gather as many viewers as classical ice hockey, but it’s worth respect and coverage as well. But interestingly, despite its relatively low popularity, floor hockey is much more accessible to people than ice hockey. So perhaps you should pay more attention to it!