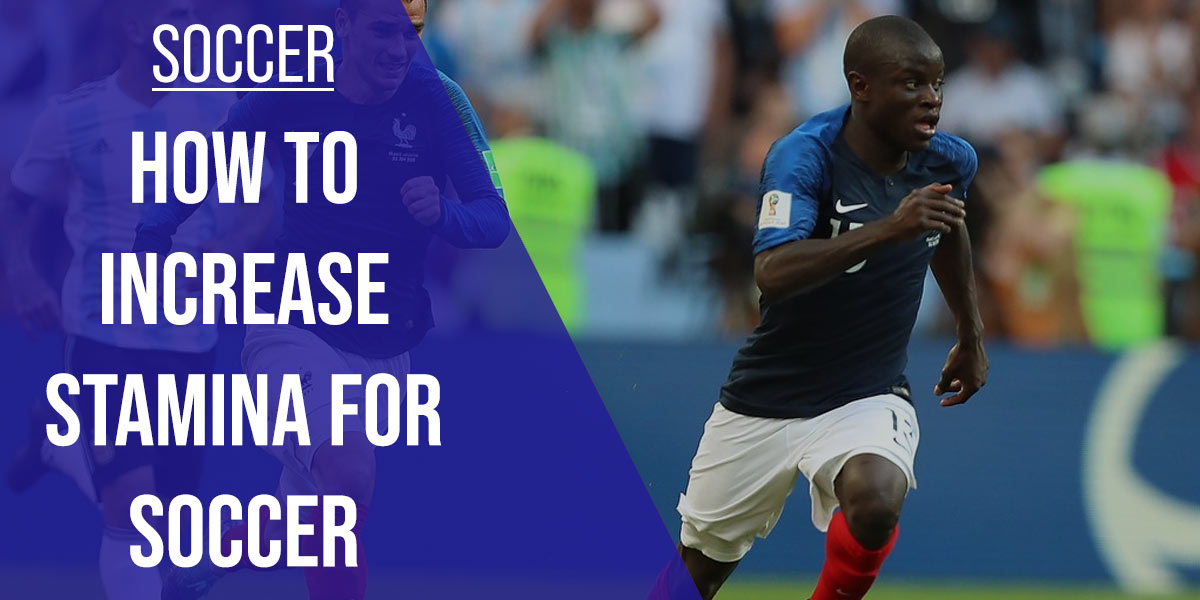 How To Increase Stamina For Soccer?

Many people may answer that cardio – such as jogging – is the best way to increase your stamina. But I and many others would argue that cardio is only a part of speed endurance training for soccer.

There is a lot more to soccer endurance training than you may be thinking. With that, in this post, I am going to teach you the basics of cardio training for soccer at home or in the field. I will try to keep this guide as detailed as I can while maintaining simplicity.

Why Is Stamina Important In Soccer?

Endurance is important in soccer because you need to be able to effectively perform your role throughout the entire 90-120 minutes.

Stamina is especially important during the latter part of the game when all players on the field are exhausted. During the last minutes, great stamina could allow you to easily outplay your opponents and score a winning goal.

Is Soccer Aerobic Or Anaerobic?

Before moving onto the methods to improve stamina for a soccer player, I’d like to touch upon the topic of aerobic vs anaerobic exercise.

So is soccer aerobic or anaerobic? Some people may answer that it is aerobic, but it’s actually both aerobic and anaerobic.

As a refresher, here’s what aerobic and anaerobic loads are:

For the purposes of this post, we do not need to deeply understand the processes behind aerobic and anaerobic exercises. What I’ve explained earlier is just enough.

A soccer game lasts at least 90 minutes, so how can it be anaerobic? Well, if you’ve paid attention to how soccer players play, they very often alternate between sprinting and jogging.

Perhaps the most vivid example of this are forwards – more or less idle much of the game, they display short but powerful bursts of energy when attacking their opponent’s goals.

With that, although soccer is mostly aerobic, it has a significant portion of anaerobic elements as well.

Do Stamina Requirements Vary From Position To Position?

Another important area to cover is the difference in stamina from player position to position.

Are there any stamina differences between soccer positions? If yes, how significant are they?

It appears that the endurance differences are pretty noticeable. A 2019 meta-analysis of 16 studies discovered the following VO2max figures for each soccer player position:

The differences in VO2max values between positions are pretty expectable. Goalkeepers appear to have lower VO2max than other players, which reflects the fact that they cover the least distance throughout the game.

Other positions, however, are fairly close to each other, though the VO2max range of defenders seems a bit lower.

Needless to say, this means that the training focus may need to be slightly different depending on your position.

Many beginning soccer players seem to think that jogging is the most effective tool for building soccer endurance. Although jogging is excellent for improving general endurance, it is actually among the least effective ways to improve stamina in soccer when used alone.

Why? I’ve mentioned why earlier – because soccer is a mix of aerobic and anaerobic loads.

Jogging alone does not translate well to soccer because soccer loads are much more intense. Soccer players often alternate between sprinting, jogging, and backpedaling during the match, so jogging is only part of the story for stamina training.

Jogging is still very useful for improving general stamina, and you should incorporate 40-50-minute jogging sessions every day. You just should not expect jogging to do the trick for your soccer stamina – there’s much more to that.

Why Is Soccer Not Popular In The US?
Can You Wear Indoor Soccer Shoes On Turf?
Top 10 Best Goalkeepers of All Time – Legendary Soccer Goalies

Get Better Stamina For Soccer

Now that we are more or less familiar with what makes soccer stamina, I can start talking about ways to increase your endurance in soccer.

High-intensity interval training, or HIIT, seems to get a lot of attention from soccer players these days.

If you didn’t know, in high-intensity interval training, an athlete alternates between short bursts of anaerobic load and longer recovery periods. Typically, the total duration of HIIT is 30 minutes, though the exact duration of your session will depend on your fitness level.

There are plenty of ways to perform HIIT:

Below, we will have a look at a few studies – you may try the programs used in them as well. There are a lot of ways to do HIIT, so there is plenty of room for you to improvise.

The best thing about HIIT is that it offers loads very similar to those in soccer matches. Combining longer periods of aerobic loads (jogging) with short bursts of strength (sprinting), HIIT progress translates to soccer endurance very well.

How does HIIT compare to other forms of soccer training?

A 2017 study set out to investigate how HIIT compares to endurance training among high school soccer players.

HIIT appears to offer comparable and even better effects than traditional endurance training. So in terms of efficacy, HIIT provides more or less the same benefits.

The VO2max in the HIIT group increased by 7.0% after 5 weeks of training, while the HVT group only saw an increase of 1.9%.

Aside from that, the HIIT group decreased its 1,000-meter runtime by about 10 seconds, while the HVT group only by about 5 seconds.

Do note that the HIIT program of the 2011 study was quite a bit different, incorporating running and drills. But the duration was again 30 minutes.

All in all, it appears that HIIT does offer improvements in soccer endurance, but its effects may significantly depend on the program.

With that, I suggest that you give HIIT a shot since it seems to be highly effective at improving soccer endurance.

Among effective ways to perform cardio training for a soccer player are:

For the best effect, you should perform cardio exercise at moderate intensity for 30-50 minutes every day. However, do not make cardio training the staple of your soccer program – remember that high-intensity activities comprise a significant portion of soccer.

Strength training is important for a soccer player as well, although it arguably is secondary to endurance. With that said, strength training has been shown to improve soccer performance in a number of activities, such as:

Although strength training may not improve stamina directly, it will allow you to do more on the field.

So you should indeed try to incorporate strength training in your sessions but keep your focus on HIIT or traditional endurance training.

To close off this post, I’ll now give several more tips for improving soccer endurance.

Elevation masks (also called low-oxygen masks) may help you boost your endurance. In one study, after 6 weeks of training, the mask group had a 16.5% improvement in VO2max, whereas the non-mask control group registered a 13.5% improvement.

Give elevation training masks a shot but don’t expect them to do wonders. The benefits in VO2max capacity are noticeable but not amazing, and proper training will do more good for you than wearing a low-oxygen mask.

This is because the increase in performance in high-altitude training is associated with an increase in red blood cell volume (RCV). If you live at low altitudes, then you probably aren’t going to see any long-term increase in RCV.

With that in mind, if you can move to a high-altitude area temporarily to boost training performance, then you may see great results. But keep in mind that a high-altitude training program works not for everyone.

Proper nutrition is crucial in soccer as well because it can significantly impact your effectiveness on the field. You should eat properly not only to maximize your training gains but also to avoid premature fatigue during the match.

A 2017 study provides daily nutrition recommendations for soccer players. Have a look at them to find out how much you should consume daily, before training, during training, and in other situations.

Dehydration can significantly reduce your endurance during soccer matches. With that, you should hydrate yourself before your training session or match and continue to consume cool drinks throughout the session. 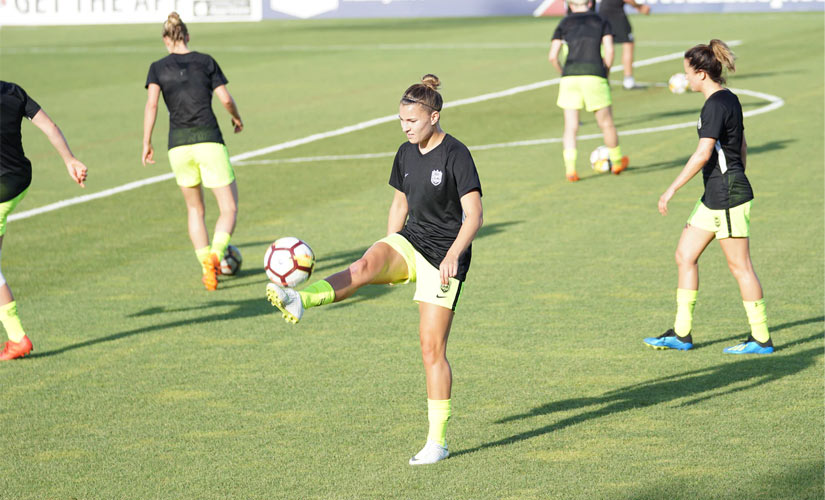 Many beginning players do not realize how significant the role of recovery is. They push very hard and then get surprised when their performance not only does not improve but even deteriorates.

Make sure that you have adequate rest between training sessions to allow for the gains to show themselves. Normally, soccer players have 2-4 days off to just rest or do training not specific to soccer.

Sleep is crucial for soccer training as well – try to get no less than 7-8 hours of sleep every day.

Soccer endurance is quite a complex topic, partly because what you should do depends on your goals and current fitness level. Unfortunately, without knowing your specific situation, no one can provide you with more specific tips and suggestions.

Hopefully, the insight I’ve provided you with will help you improve your level of stamina as a soccer player. Use the tips I’ve provided as a baseline for your training program and see what works for you best.
But the most important tip to remember is this – your endurance training should be specific to soccer and your role in the field. Cardio alone will not help – you should throw in some high-intensity training too to help you simulate the loads that you actually see during a match.