Why Do Soccer Players Fake Injuries? 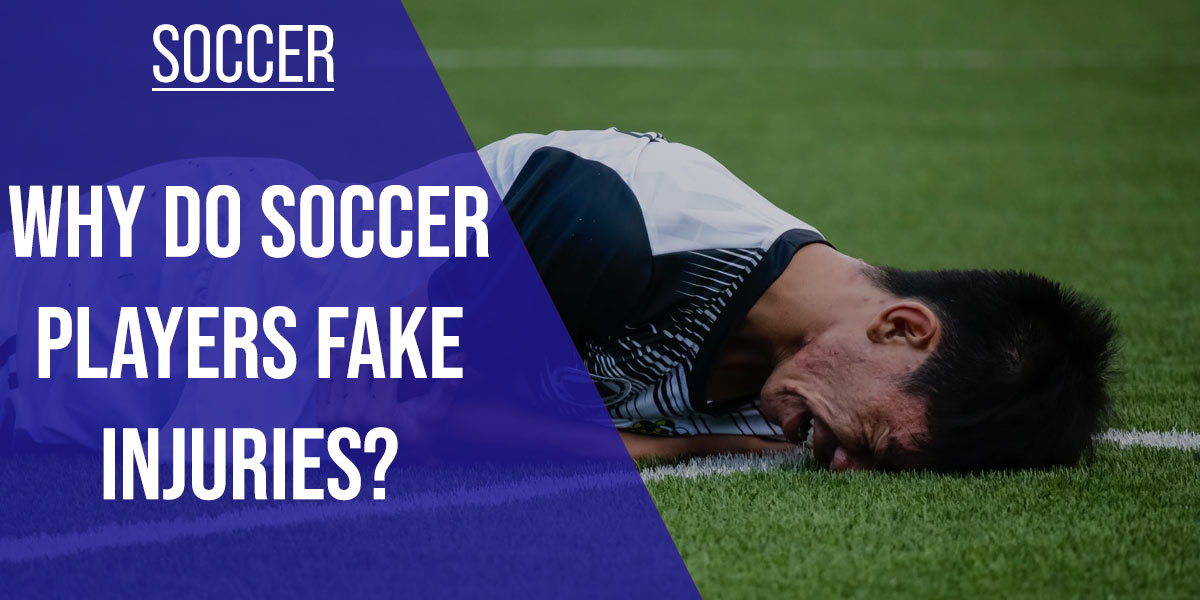 Diving is a pretty ugly soccer phenomenon, and I’m confident that many soccer fans would agree with me. And it doesn’t really matter why players simulate injuries – it should not stain the good fame of the sport.

However, why do soccer players fake injuries? Why would anyone want to deceive the referee?

Well, there are a lot of reasons for simulation in soccer. This is actually a fairly complex topic, but I will break it down for you and try to give you better insight into why soccer players fake injuries.

Soccer Players Are Not Soft – They Are Strategic

One thing I’d like to get quickly out of the way before moving to reasons for faking injuries is that soccer players are not as soft as many people consider. Soccer sure does not look as physically demanding as American football, but it is still a pretty tough sport.

I am comparing soccer to American football because soccer is actually called football outside of the US, and many people like to compare the two with each other.

It takes a lot of conditioning and years of training to be able to stay active in the field for 90 minutes. For playoff games, you have to be ready to go for all 120 minutes if a winner doesn’t get determined during the game.

So no, I think that soccer is far from being a soft sport. It just has more grace and doesn’t look as rough as American football.

I’m not saying that soccer coaches endorse faking injuries, but they probably won’t bat an eye if diving allows the team to score one more goal or even win a match.

Injuries In Soccer Do Hurt A LOT

Soccer players don’t always fake injuries, even when it seems that they are simulating. Soccer injuries can hurt a lot. Not only that, but players can experience a few unpleasant minutes from even light contact with an opponent.

The reason? Well, soccer shoes have studs, first of all. If another player hits you in the shin or steps on your foot, you definitely aren’t going to have a good time.

Even if we forget about studs, then there also are impacts. Soccer players fairly often hit their heads when attempting to head a ball. Not only that, but collisions at high speed can also be at least mildly unpleasant.

Reasons For Faking Injuries In Soccer

Soccer players aren’t always faking injuries, but they do that fairly often. When players indeed dive, they could be pursuing the following goals.

Getting Free Kicks Or Penalties

This is perhaps the number one reason for simulating an injury. Getting a free kick in an advantageous position could turn the game around. I’ve seen a lot of free kicks that ended in goals, so getting a free kick is definitely huge in soccer.

And I am not even talking about penalties since the goalkeeper’s chance to save the goal is low. Of 100,000 penalty shots made since 2009, 75.49% were scored, and only 17.57% were saved. The rest went wide or hit the goalposts or the crossbar.

So yeah, if faking an injury can earn your team a penalty without repercussions, then players won’t think twice.

Getting An Opponent Penalized

Another big reason to fake injuries is getting an opponent penalized for a foul.

A red card would probably be the peak of success for the faking player – with one player less, the opposing team would find itself at a huge disadvantage.

However, even a yellow card could dramatically change the flow of the match. The penalized player may start playing really carefully to avoid getting a second yellow card and being removed from the game.

Some players, on the contrary, may hold a grudge against the faking player and actually commit an offense against him. Needless to say, such behavior will most likely result in a second yellow card and a send-off.

Experienced referees are not blind and can see when a player is faking. So I wouldn’t say that players are often getting penalized for nothing.

With that said, yellow and red cards have a huge effect on the flow of the game and can psychologically affect the player that the referee cautions.

Throwing Off The Tempo And Frustrating The Opponent

Disrupting the tempo of the opponent can be huge in soccer as well. It is psychologically taxing because players may get frustrated, unable to reach the culmination of their efforts – a goal. Aside from that, disrupting the opponents’ flow may prevent them from realizing their strategy.

Pretty much any game stoppage will disrupt the opposing team’s tempo. And this may not be necessarily the goal of the faking player – most often, those who simulate injuries aim to obtain a free kick or penalty for their team. The effects are still there, though.

But in some cases, disrupting the game may be specifically the goal of the diving player. This happens especially often toward the end of the game when the team of the faking player needs to maintain the score.

Getting Some Rest Time

Soccer players boast exceptional conditioning, but they also get exhausted. This is especially true for playoff games that last more than 90 minutes because the score was a tie after the end of the second half.

Anyway, if the simulation ends in a game stoppage, then players get the chance to rest a little. However, the opponent rests as well, so the usefulness of faking injuries to get some rest is debatable.

And the final reason I’d like to mention is saving face.

It’s difficult to tell how many players simulate injuries to avoid embarrassment – we will never know. However, I bet that among top players, simulating to save face occurs more often than among lower-class players.

Are Simulations An Offense In Soccer?

Simulation is indeed punishable in soccer. In fact, in accordance with the 2020/21 Laws of the Game, simulation is punishable by cautioning – that is, a yellow card. For a second offense, the player will be obviously sent off.

In some cases, the referee may even show a red card straight away, but this is rare.

Referees can still make mistakes, so diving will not necessarily be detected by him. But with the introduction of the Video assistant referee (VAR) system, identifying and punishing simulation is perhaps easier than ever.

Back in the days when soccer was just a few decades old, staying on the field despite an injury was considered a sign of manliness. Not only that, but players chose to appear tough so that their opponents would not suspect that they are hurt.

With that said, before the 1970s, soccer was much rougher because the rules on body contact weren’t as strict as they are today.

In the 70s and 80s, illegal body contact has begun to be penalized more heavily. Committing a foul has become easier as well because of the introduction of stricter rules.

Well, soccer players appear to have started taking advantage of the stricter rules – by faking injuries.

Aside from that, as “The Conversation” points out, players today mostly lose the ball due to flawed passes or mis-controlled balls. With that, losing the ball in today’s soccer is one of the worst mistakes one can make. And to save face, players – you guessed it – resort to simulation.

The situation may change, however, with the introduction of the Video assistant referee (VAR).

This system is relatively new – it was added to soccer’s laws of the game in 2018 – and we don’t yet have statistics on how it has affected simulations in soccer. But it’s probably safe to say that referees will resort to VAR more and more to assess offenses.

And most likely, we’ll see simulations decline as more and more players get punished for it. We already have one serious precedent, in fact.

One famous case where VAR stepped in happened during the 2018 FIFA World Cup. During Brazil vs Costa Rica match in the group stage, a VAR review overturned the penalty awarded to Brazil after Brazil’s Neymar had dived.

Which Player Positions Simulate Most Often?

I’ve found some interesting stats regarding dives, specifically the frequency of dives based on player position.

This chart was made by Vox based on the results of a 2011 study by PLOS One.

As you can see, attacking players perform more dives than defending players. And this perhaps makes sense because obtaining a free kick in the opponent’s half is more advantageous.
Aside from that, the study discovered that dives occurred twice as frequently in drawing matches.

This also makes sense since in a draw, when players may be more inclined to dive in order to obtain a free kick to possibly score a goal.

PLOS One also notes that surprisingly, the more often dives were used, the more frequently they were rewarded! And as referees awarded more penalties to teams, players became more encouraged to dive throughout the match.

Final Thoughts – Is Diving A Bad Phenomenon In Soccer?

To close off this post, is faking injuries bad in soccer?

Well, it certainly is. The case I brought up earlier – Neymar’s dive at the 2018 FIFA World Cup – shows how faithful simulation can be. Although Costa Rica ultimately lost the game anyway, in a different situation, diving could make the difference between winning, drawing, or losing a match.

Referees should certainly penalize diving, and the introduction of VAR in this sense was a necessary step. VAR has been controversial – partly because people think that it diminishes the role of referees on the field – but it has some positives too.

In the end, I think that players should maintain sportsmanship and play soccer as it’s supposed to be played. Soccer is a beautiful sport, and dirty offenses like diving do not have a place in it.