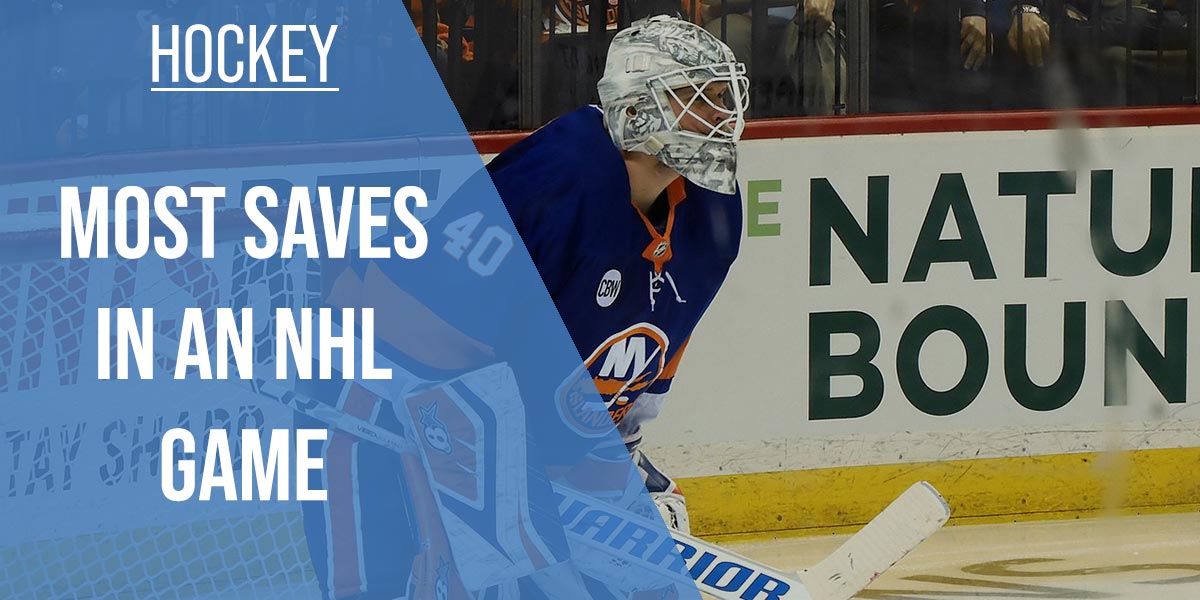 Most Saves In An NHL Game

The National Hockey League will soon celebrate its 103rd birthday. Over the last century, the NHL has seen the biggest spectacles of ice hockey, including some of the best goalkeepers in the history of the sport.

Today, I’d like to introduce you to the highest save counts in NHL games in history – so far, at least, since we’re likely to see more in the coming years.

The most saves in the history of the National Hockey League are attributed to Normie Smith with 92 units.

On March 24 of the distant 1936, the Detroit Red Wings (Smith’s team) clashed against the Montreal Maroons in what is still to this day, the longest game in the history of the NHL.

The majority of the game went scoreless – Mud Bruneteau of the Red Wings scored the first goal of the game at 16:30 in the sixth overtime. This shot ultimately brought the Detroit Red Wings a 1-0 win.

The entire game lasted for a whopping 176 minutes – nearly 3 full games! Throughout the game, Normie Smith made 92 saves, which is the most in NHL history. Oh, and he also reportedly lost 12 pounds during the game.

The NHL actually didn’t seem to have any save stats from before 1955. Even the 92 saves by Normie Smith are marked with a hesitant “reportedly” in the news piece I referenced earlier.

Official goaltender save stats on the NHL website are available for 1955-56 and onward, for games both in regular season and playoffs.

Most saves in regular seasons - 70

Regular season games are known to be less intense. However, the most saves ever recorded belongs to Ron Tugnutt of the Quebec Nordiques – 70 saves in a single game.

The game where Tugnutt made his 70 saves took place on March 21, 1991. Tugnutt’s Quebec Nordiques was playing against Boston Bruins. The game ended with a 3-3 score, so despite the immense and literally record-breaking effort of Tugnutt, his team was unable to secure a win.

Notably, Boston Bruins’ goalie Rejean Lemelin only made 23 saves in that same game. So yeah, the defense of Quebec Nordiques should have been better. However, the number of saves by Lemelin only accentuates how much work Tugnutt did for his team.

It’s a miracle that the game was even a draw!

The game also lasted about 65 minutes, so it was a pretty event-packed confrontation!

Even though 70 is far off Normie Smith’s 92, it’s still an impressive number that is yet to be beaten.

By the way, Tugnutt’s save record is a considerable 5 units ahead of the second place – 65 saves by Mario Lessard of Los Angeles Kings.

Most saves in regular seasons among currently active players - 58

Ron Tugnutt retired back in 2004 – a very long time ago. And one would think that with modern gear, hockey players would be able to make grandiose progress in the save department.

Well, that’s not the case actually – the highest number of saves among players active as of this post’s writing was 58 by Mike Smith of Arizona Coyotes.

The match that made him a record holder among active goalies took place on December 4, 2016, and was against Columbus Blue Jackets. CBJ won in the shoutout with a 3-2 score.

Most saves in playoff games - 85

The record-setting game for Korpisalo took place on August 11, 2020, and was against Tampa Bay Lightning. The game ended with a score of 2 – 3 and TBL’s victory.

The CBJ – TBL match actually was also the fourth-longest game in NHL history. The winning goal was scored 10:27 into the fifth overtime by Brayden Point. The match itself lasted nearly 151 minutes!

Other Useful Hockey Articles
What Is Interference In Hockey?
Best Goal Horns In NHL
What Is Charging In Hockey?

Some More NHL Save Records For Stat Freaks

So I’ve looked around the save records of NHL and found some other interesting figures too. These don’t pertain to single games, but I think they are interesting enough to be mentioned here.

I highly suggest that you have a look at other NHL stats, they’re pretty interesting.

Anyway, looking through all these historical records has been pretty exciting to me. I can’t wait to see what future years of hockey bring to NHL fans! Although these records are pretty old, I hope that we will see someone break them soon.