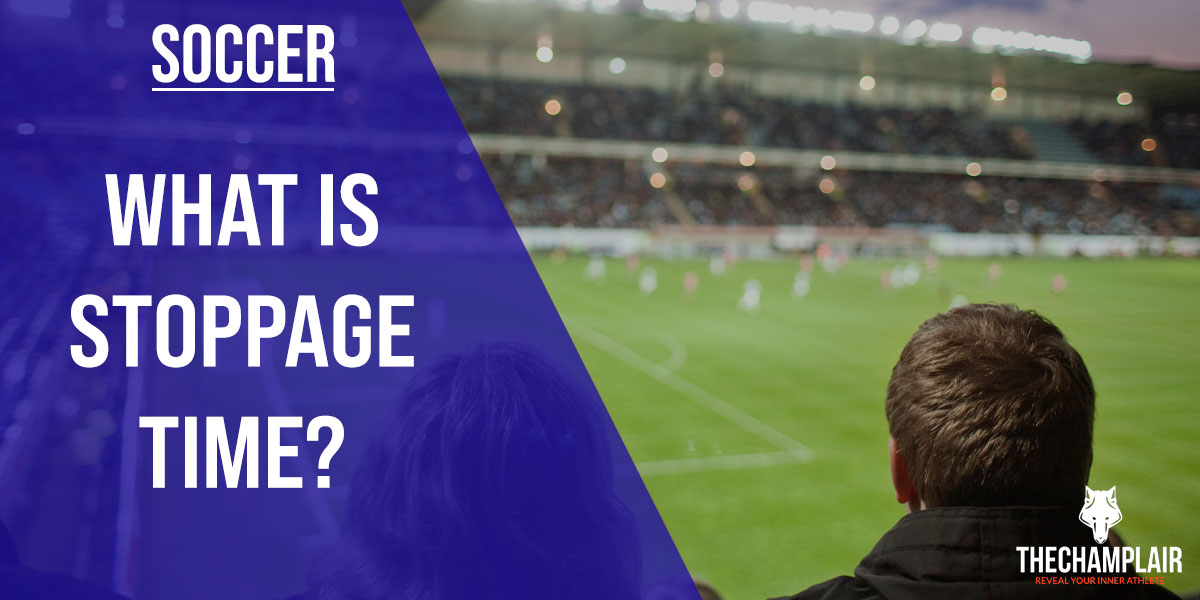 I remember watching a game of soccer with my dad when I was a kid. I didn’t know much about soccer back then, but I enjoyed it. I don’t remember today which game we were watching, but it was probably a game from the English Premier League (My dad’s a lifelong Arsenal fan!).

The game was just about nearing its end, and Arsenal was losing. You can imagine how tense my dad might be at that time. The clock had 90 mins, but the game didn’t end, which was a shocker to my innocent childhood-self. I didn’t know why the ref hadn’t blown the full-time whistle!

Eventually, the game did end, but I noticed the clock had shown 90’ + 3’, and the ref blew the whistle at the end of the 93rd minute. It amused me, so I asked dad about it, and that is how I was introduced to stoppage time in soccer!

He explained everything to me patiently, as he always did with everything I asked.

If you’re someone who has the same curiosity about added time or stoppage time in soccer, you’ve come to the right place. Read on, and I’ll tell you all about it, just like my dad did!

What is Stoppage Time?

You know by now that a game of soccer lasts for 90 mins. The 90 mins duration is split between two halves. And each half lasts for 45 mins of playing time. In these 45 minutes, often teams will stop play for a foul, outside, goal, celebrations, corner kicks, etc. Whenever the ref blows the whistle to stop the game, it counts as a stoppage.

So what is stoppage time then? It is the compensation time for all the stoppages that occurred during standard playing time. The 4th official is the one that indicates additional time/stoppage time around the last minute in both halves.

Note that stoppage time is also called ‘added time’ or ‘injury-time.’ They mean the same thing, so don’t get confused.

Other Useful Soccer Articles
How Far Does A Soccer Player Run In A Game?
One Person Soccer Drills For Individual Training
Best Indoor Soccer Shoes Reviewed

When Does Stoppage Time Occur In Soccer?

The answer is straightforward. Stoppage time always occurs just before half-time and full-time. Keep that in mind.

(If you’re confused between ‘extra time’ and ‘stoppage-time/added time,’ then you can skip to that section on this article.)

With that clear, let’s talk about the various reasons for which stoppage time gets awarded. We’ll also go over how the referee decides the amount of time needed.

The ref’s watch has multiple modes, which allows them to track time whenever a stoppage of play occurs. You won’t see the game’s clock stop; it’ll continue as is. But the referees keep track of the time that is being lost due to halts in the game.

Some general reasons for which play is stopped –

(This list is not exhaustive. There can be more things that cause a stoppage in play.)

I hope you’re starting to develop an idea of the reasons behind adding stoppage time to the game. If not, don’t fret. It is not that complicated.

So, how does the referee decide how many minutes to add? The answer is that they have a fixed, standard operating procedure to go about adding seconds to the clock.

For example, if a goal is scored and the team goes on celebrating. On average, the referee will add +30 seconds to the clock when counting for stoppages. If, however, the celebration goes on too long, the referee can add more time at his discretion.

Similarly, whenever a foul occurs, the refs have a standard amount of seconds fixed as per protocol. They add that to the clock, and if they feel that it is inadequate, they can add more to compensate for the loss.

Why Is Stoppage Time Important?

After my dad had explained how stoppage worked and when it occurred, my next doubt was this question. “Why is stoppage time given at first? So what if the game had to halt? Isn’t it all part of it?” If you’re curious about that, here’s the answer.

Take one look at the stats, and you’ll see that about 75% of goals occur in the first and last 5 minutes of a game. Isn’t that crazy? The suggestion that stoppage-time goals are common adds to the importance of added time in any game. It acts as a great motivator and presents a further chance for the teams to score.

Further, if you go through history, you’ll notice instances of severe time-wasting when stoppage time wasn’t a concept. Yes, sometimes, when the game is too important to lose, players tend to throw sportsmanship for a toss.

There have been multiple cases of players throwing the ball out of play or sometimes even the stadium, to give you an example. Why? Because they gave away a penalty in the dying moments of the game, and there is no way someone can retrieve the ball from out of the stadium in the remaining time (usually 1 minute). Not very sportsmanlike, is it? Thankfully, this was back in 1891, and things have changed since. But, players continue to waste time in more ways than one. And that is why stoppage time exists and is an essential part of every game of soccer.

What Happens If Stoppages Happen In Stoppage Time?

The answer is short. It is just more of the same. If stoppages occur in added time, then it is up to the referee to decide how much time to allow before blowing the final whistle. Often, the referee will let attacks play out if there’s a chance to occur a goal.

I hope this clears out most of the questions you have about stoppage time rules. If you have questions, you can comment below.