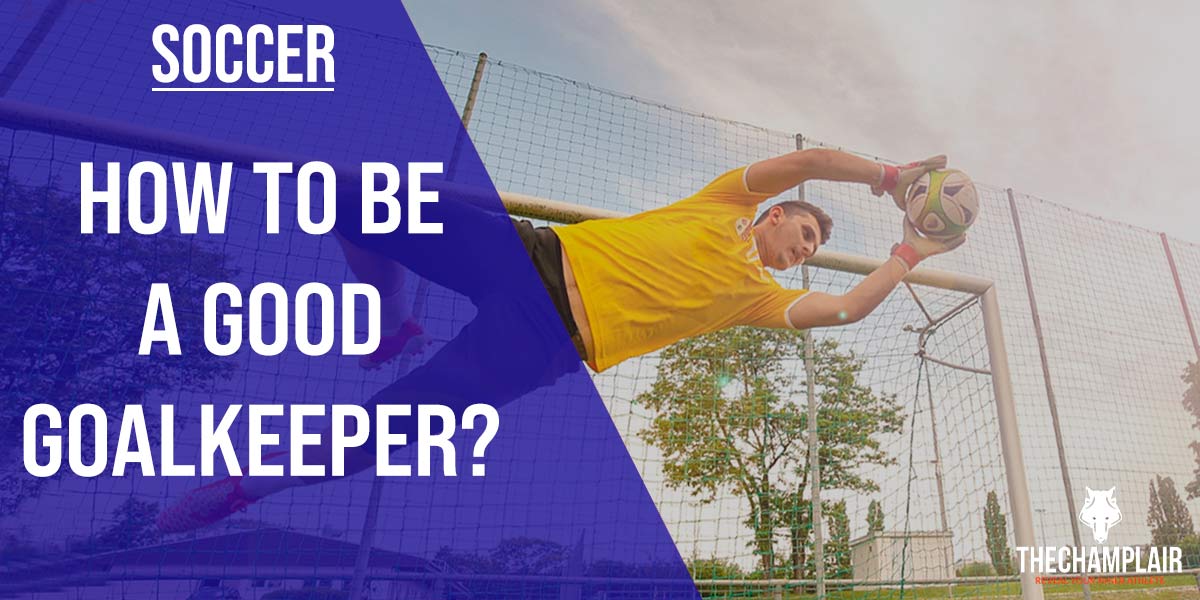 How To Be A Good Soccer Goalie [Goalkeeper Tips]

Although soccer has seen many outstanding talents that have nearly singlehandedly ensured the success of their team, soccer is not a game of one athlete. Every one of the 11 players on the team shares responsibility for the outcome of the match.

With all that said, goalies arguably have the most impact on the game. As a goalie, you are the man (or woman) responsible for keeping your goal undisturbed.

To be successful, goalies need to possess several traits, including:

In this guide, I’m going to dive a little deeper into the things that make a good soccer goalie. Hopefully, my goalkeeping tips will help you understand what you should fix in your play to become even better at goalkeeping.

How To Be A Good Soccer Goalie [Goalkeeper Tips] 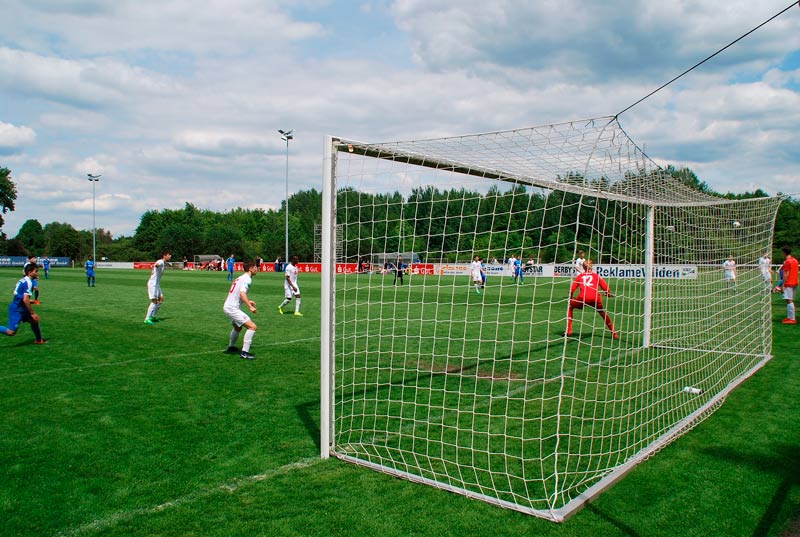 1. Know the rules of the game

First up on our goalkeeper tips, we have rules.

Haven’t had a look at IFAB’s (International Football Association Board) Laws of the Game? If not, you definitely should. You don’t need to remember every single rule from the rulebook, but anything connected to you or your teammates is a must to know.

You may have the potential to become the very best goalkeeper in the world, but if you don’t know what you are and aren’t allowed to do on the pitch, you aren’t going to go very far in the sport.

What goalies may and may not do

Goalkeepers are the only players in soccer who can grip the ball. But they can only do so within their own penalty area.

This is common knowledge, and you will hardly find anybody who isn’t aware of these two simple soccer rules. There are many more goalie-specific rules in soccer, however.

Note that Laws of the Game change frequently, so you should check out each newly published rulebook. Generally, changes are summarized at the end of the rulebook.

Also, check out soccer rules in your country or association. Although the Laws of the Game serve as guidance for many associations, there may be some crucial differences between leagues. 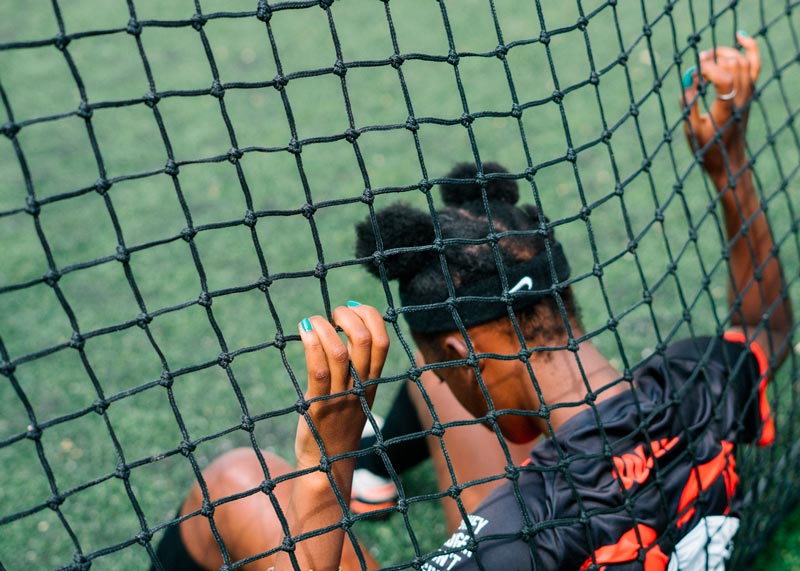 Aside from these compulsory items, goalies may also wear tracksuit bottoms.

The colors of a goalie’s uniform must be easily distinguishable from match officials’ and other players’ colors. Goalkeepers of opposing teams may wear shirts of the same color if they both don’t have another shirt.

While in your penalty box, you should position yourself properly. Here are a few pieces of advice for proper positioning.

Your position as a goalkeeper is unique among other players in that you can see everything happening on the field. You should take advantage of this fact and carefully watch every player – be they a teammate or attacker – as the game progresses.

For goalkeepers, the ability to react and make a decision quickly is essential when making clutch shot-stopping. With that said, strategic thinking and the capability to see the game as if from above are important goalie skills as well.

By closely following events on the field from your box, you will be able to more or less accurately guess what’s going to happen next. This will then allow you to adjust your position or guide your defense for them to be able to counter the attackers’ next move effectively.

4. Communicate With Your Teammates

Staying in touch with your teammates – especially defenders – is crucial for the game’s outcome. Though you aren’t the coach and your teammates can probably see what’s happening on the field just fine, you should put your unique view of the entire field into good use.

Here are some of the things that you could and should do:

5. Be Aggressive And Decisive In Defense

If an opponent is charging at you down the field, you should be able to anticipate their next move and act accordingly. This especially applies to one-on-one situations where your defense is powerless to stop the attacker.

In situations like this, you need to be aggressive and ready to make a decision quickly:

Aside from that, make sure to attack any ball that comes towards the goal. An unsecured ball is an easy trophy for the opposing team – don’t let them take advantage of an unclaimed football. 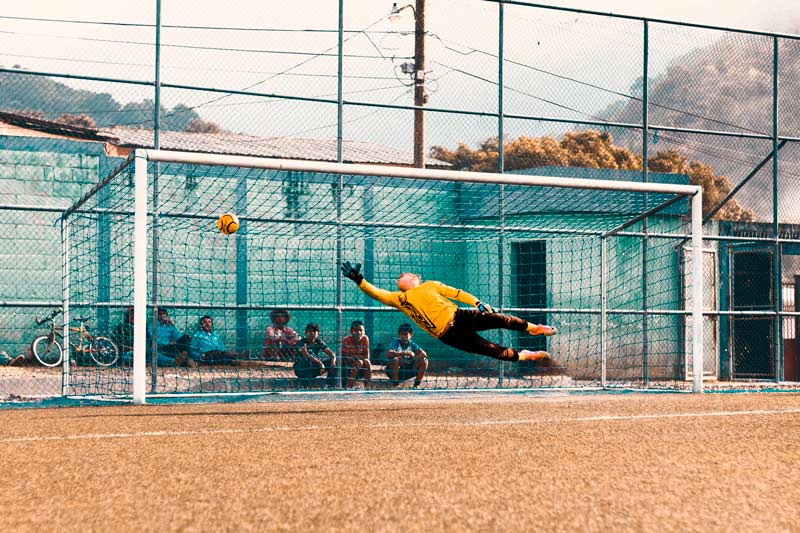 Hopefully, you won’t have to save shots often – but when you do, you got to do it efficiently. Here are a few tips for you to follow:

Fast reaction times and good coordination will ensure that you can put the rest of your strengths to good use. Without the ability to react to the motion of the ball rapidly, you won’t be a good goalie even if you are the best communicator in the world and have unbeatable strategic thinking.

The key to improving your motor skills and reaction times is drills and practice. Your training should incorporate both general drills – like dribbling or passing the ball – and more goalkeeper-specific exercises.

Among the things that you could do to improve your reaction times and coordination are:

8. Learn How To Save Penalties

Penalties are arguably the toughest challenges for goalies. Goalies have little time to react, which results in very high score rates for penalties. According to InStat, only about 17.5% of penalties are saved, meaning that goalkeepers miss the vast majority of penalty balls (though some goalies are obviously way better than others).

Nonetheless, you should try to do your best to save a penalty, even though the odds aren’t in your favor.

Here are some tips to hopefully help you increase your success rate with penalties:

Watch lots of penalties. You should also watch plenty of penalties to get a sense of how penalty takers move when taking the shot. Try to identify patterns in movement and the direction of the ball – this may help you more successfully guess where to dive during a penalty.

And finally, on our list of soccer goalkeeper tips, we have mental toughness and confidence.

Mental resilience is essential for any player in soccer. But it’s especially significant for goalies since they bear so much responsibility on the pitch.

Mistakes and failures do happen, and you need not be discouraged by one or two missed goals. Stay confident and motivate your teammates to do the same – if you keep your cool, there still is a chance that the flow of events will turn in your favor.

In-game mistakes aside, you should be resistant to mental obstacles that may be present in your team. Practice doesn’t always go perfectly, and tense relations with your coach can further increase the pressure on you as a goalkeeper.

Be confident in your skills, and remember that you’ve trained very hard to get where you are today. Your effort hasn’t been in vain.

Learn to focus on positives and ignore negatives. If necessary, talk to a sports psychologist to help you identify and cope with mental issues, as well as improve your confidence.

Finally, don’t feel guilty about a loss – remember that there are 10 other athletes on your team sharing responsibility for the outcome of the game, even if it’s your job to save the goal when others make mistakes. 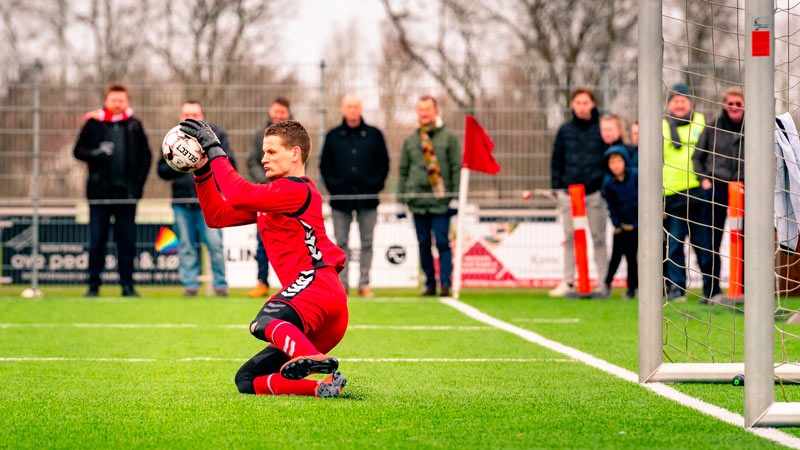 What is the perfect height for a goalkeeper?

There is no “perfect” height for a goalkeeper – the taller you are, the better.

With that said, soccer has seen very short goalies (though they certainly aren’t a “norm” for the sport). Paraguayan goalkeeper Pedro Benítez is considered the shortest goalie in soccer history, with a height of just 1.66 meters (5 feet 5 inches). The dimensions of the goals were the same as today, so it’s not like being short was acceptable back then.

If you are short, you won’t necessarily be unsuccessful as a goalie. However, unless you have some unparalleled skill in other desirable qualities – like reaction time – shortness will be to your detriment. If you are short, you are very unlikely to be selected to a team in the first place!

How can I improve my goalie skills?

To put it short, you should focus on the following areas to become a better goalkeeper:

Are goalkeepers allowed to score?

Yes, goalies may score just like any other player on their team. In practice, this rarely happens because goalies stay in their penalty area most of the time. But some goalies do leave the penalty area to join their team’s attack in the last seconds of the game when they need to score to win or even out the game.

With that said, balls thrown into the opposing net aren’t counted as goals. Different leagues may handle galls from throws differently, so check your association’s rulebook.

Can goalkeepers pick up a throw-in?

Goalies aren’t allowed to catch a throw-in if their teammate performs it.

Goalies are allowed to wear caps – unlike other players on the pitch.

Can goalkeepers get a red card?

Serious foul plays can earn goalies a red card. When this happens, the team of the offending goalkeeper is reduced to 10 members. One of the outfield players has to leave the pitch then to give place for the substitute goalkeeper. 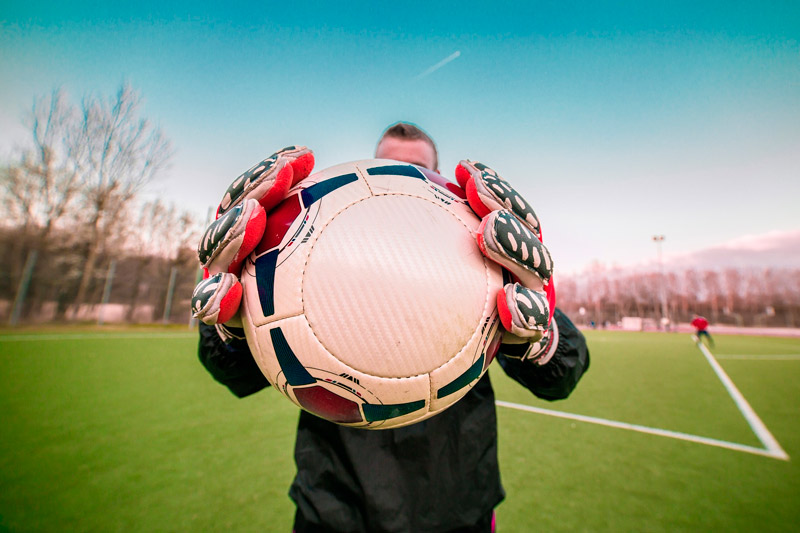 And that’s it for my soccer goalkeeper tips!

It takes a LOT to become a good goalie. But if you follow my tips from above, you will

make a step in the right direction.

Obviously, you need to continuously work on your skills and traits to ensure that you become better, adapt to the changing situation on the field, and effectively protect the goal area. The more you work, the better you get. So make sure to put the due amount of effort into your goalkeeper training!