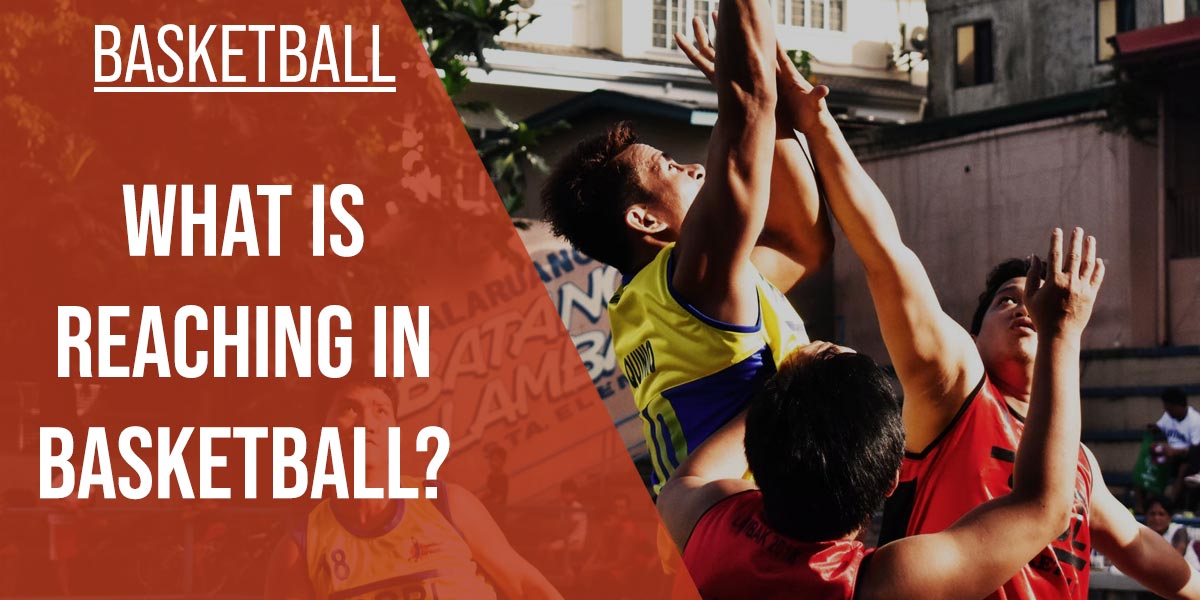 What Is Reaching In Basketball?

Newcomers to basketball may be wondering – what is a reach-in foul in basketball?

If you are confused about the concept of “reaching-in”, then you aren’t alone. Reach-ins are sometimes legal and sometimes not, which can drive basketball newbies crazy!

In this post, I will talk about what reaching-in is when it is considered a foul, and cover everything else that you should know about it.

What Is The Reach-In Foul In Basketball?

First things first, the reach-in foul is not formally defined by any basketball rules (including NBA rules). Fans and journalists commonly use the terms “reach-in” or “reaching in” when defenders come in illegal contact with an opponent in possession of the ball.

The so-called reach-in foul occurs when a defending player reaches toward the orange in an attempt to steal the ball but instead illegally contacts the ball handler.

The act of reaching in by itself is not considered a foul in any rulebook, be it NBA or FIBA rulebooks. However, depending on the circumstances, it may indeed be a foul.

Rule 12B Section I point (a) of the NBA rulebook states that holding, pushing, charging into, or preventing the progress of an opponent by bending the body into a position that is not normal or extending a hand, arm, leg, or knee is not allowed.

Defending players who are guarding an opponent in possession of the ball are not allowed to initiate contact with him as well. Touching forearms, hands, or body checks are not allowed.

There are some exceptions to this, however, defined under Section I point (b) subpoint (a). For example, incidental contact with an offensive player’s hand is not a reach-in foul if it doesn’t affect the player’s speed, direction, balance, or rhythm.

Rule 12B Section I point (c) also defines that if the actions of a player against an opponent cause illegal contact with another opponent, the very first player is to be charged a personal foul.

Finally, point (e) states that contacting the hand of an offensive player while that part of the hand touches the ball is legal. And this is exactly where the vast majority of reach-in fouls occur.

What are the penalties for “reaching in”?

If illegal contact with the hand of an offensive player occurs:

Finally, in this section, I’ll give answers to some FAQs to give you a better idea of when reaching in is legal and when it is a foul.

Can you grab the ball out of someone’s hands in basketball?

This is indeed allowed as long as you:

If you meet these three conditions, then touching the ball is legal, and no reach-in foul will be called against you. This is how you can legally steal the ball.

Can you slap the basketball out of someone’s hand?

As long as you only touch the ball or the part of the ball handler’s hand that touches the ball, you are allowed to do this.

Can you punch the ball in basketball?

No, Rule 10 Section IV point (a) states that “a player shall not kick the ball or strike it with a fist”

Is slapping the hand a reach-in foul in basketball?

Slapping or otherwise contacting the hand of a player in possession of the ball is only legal in two cases:

When that part of the player’s hand touches the ball. For example, if only the fingertips touch the ball, then touching the offensive player’s hand anywhere else is a reach-in foul.

In the end, reaching in basketball may be called as a foul if any illegal contact occurs between the defender and the ball handler. This explanation obviously omits a lot of details, but you get the point.

Reaching in can lead to free throws for the other team if done improperly, but they give you the best chances to steal the ball from your opponent and turn defense into offense in the blink of an eye.

I suggest that you go read the NBA rulebook on your own too. I’ve only covered the most important details – there are plenty of other things in the rulebook that might be useful for you.