Why Do Football Players Wear Black Paint Under Their Eyes?

Have you ever wondered why football players (and also some athletes in other sports like baseball) apply black paint under their eyes?

Although there is an aesthetic aspect involved, the reason is actually rather functional. Below, you’ll find out why football players wear black under their eyes and whether you should follow suit!

What Is The Black Mark Under Football Players’ Eyes?

That “black mark” is known as eye black. Traditionally, eye black is grease made of paraffin, beeswax, and carbon black.

Face strips simulating the look and function of eye black grease are also available. These strips are less messy and are easier to apply than grease eye black while supposedly delivering similar effects.

Eye black is particularly popular in football, but athletes in baseball, softball, and lacrosse also wear it. The black paint is super-popular in American sports, but not in similar sports outside the US. Rugby, soccer, or cricket athletes don’t typically wear eye black, for example.

Why Do Football Players Wear Black Paint Under Their Eyes?

The primary purpose of applying black paint under one’s eyes is to, theoretically, reduce glare and improve contrast sensitivity. I say “theoretically” because available studies are inconclusive about the effectiveness of eye black (though there aren’t many studies, to begin with).

Essentially, eye black is thought to absorb light, reduce sun glare, and thus considerably improve visibility. When players are rushing across the field and need maximum visibility of the ball, every little bit of help counts.

It’s generally considered that it was baseball legend Babe Ruth who pioneered the use of grease with the aim to reduce glare. This happened around the 1930s.

But according to ESPN, the earliest known case of the use of eye black is Redskins fullback, Andy Farkas. Farkas is thought to have come up with the idea on his own in 1942.

Eye black can be beneficial not only during the day but also in low-light conditions. This is because eye black may dampen glare caused by stadium lights.

Performance benefits aside, some may wear eye black to make a statement or as part of their style. Probably no experienced football player will be intimidated by a particularly formidable eye black pattern, but it’s still a good way of standing out.

I came across three more or less reliable sources in regards to eye black effectiveness. Let’s have a look at these below.

Eye black grease was found to be noticeably more effective than stickers and petroleum jelly at reducing glare and improving contrast sensitivity. However, note that this was a very small-scale study, and participants seem to have been aware of what was applied to their faces and may thus have been biased.

Also, skin without any grease wasn’t used as a control condition, so it’s unclear how eye black compares to it.

18 male and 28 female students from New Hampshire were selected to test the effects of eye black. The vision was compared with and without eye black. Trials ran from November 2003 to February 2004.

Eye black was found to improve contrast sensitivity, though the effects were small. However, the study again wasn’t performed double-blind – that is, participants were aware of what was being applied to their faces.

MythBusters tested eye black in Episode 99: Viewers’ Choice Special. They determined that the benefits of eye black were plausible since it did improve one’s ability to differentiate between light and darkness. However, in bright conditions, eye black doesn’t seem to have benefits.

Should You Wear Eye Black?

No matter what studies say about eye black, if you want to wear it, go ahead. Eye black probably won’t harm your performance on the field. It may be able to help you, or maybe it won’t. Give it a shot – eye black doesn’t cost a lot anyway.

Just google “eye black” if you don’t know where to start.

To help you a little, here are a few good eye black options: 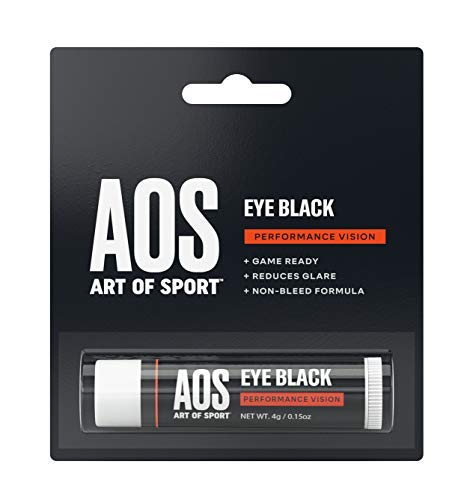 So, in the end, football players wear eye black to reduce glare and improve visibility. Whether or not this works is unclear, but if you are wondering, give eye black a try. Eye black probably won’t make your performance worse, so it’s perhaps worth a shot.

Brad Smith
Brad Smith has been coaching high school Football for 6 years in Florida. He and his wife have 3 beautiful children who he hopes will become the first Jaguars to win a Superbowl. Other than Football, Brad loves American litterature, parenting, gardening, and home remodeling.