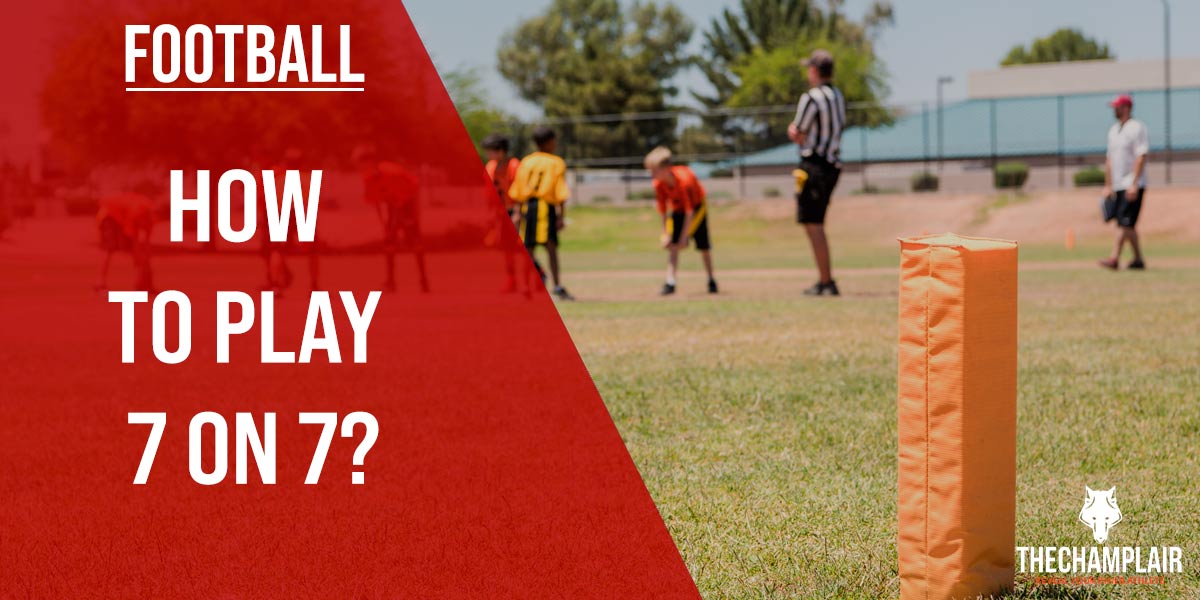 How To Play 7 on 7 Football? Positions & Rules Explained

7 on 7 football is a more condensed, faster version of American Football.

Invented in the 1940s by American soldiers living in army bases around Europe and the pacific, the soldiers wanted to play a game that wouldn’t injure them ahead of going into battle.

Fast forward to today, and the game is played nationwide, in high schools, universities, and specialist leagues all around the United States.

It’s an exciting, attacking game that is played at pace, with two teams of seven players attacking each other’s endzone through long passes and fast running football.

Personally, it’s one of my favorite variations of the classic American Football format simply because it can be played anywhere by anyone!

The main difference between 7 aside 7 football and its traditional format is that there is no contact allowed. That means players also don’t need to wear pads and helmets either.

But that also means the game is a lot more free-flowing, and as there are fewer stoppages at the contact, that encourages players to show off their passing and catching skills.

That also means there are no running plays, with the attacking team being forced to throw the ball upfield on each occasion.

Typically a seven aside football pitch will be around 40 yards in length, distanced by a 25-yard line and a 10-yard line.

Each attacking team will receive three downs and will start from the 40-yard line. Once they cross the 25-yard line, they’ll receive a first down and the same with the 10-yard line.

In some game formats, teams can receive four downs when they cross over the 10-yard line, but that varies from league to league.

Players are tackled if they are tagged below the neck when in possession of the football. Some leagues also use flags to denote a tackle. That requires players to wear a belt with two tags on which are ripped off by defenders to signify a tackle has been made.

The match is split into two 20-minute halves, with teams swapping sides after a short half-time break.

The other big difference is the number of players each team is allowed on the pitch at any one time. With only seven players on the field, teams have a little more space to attack and get into scoring positions. 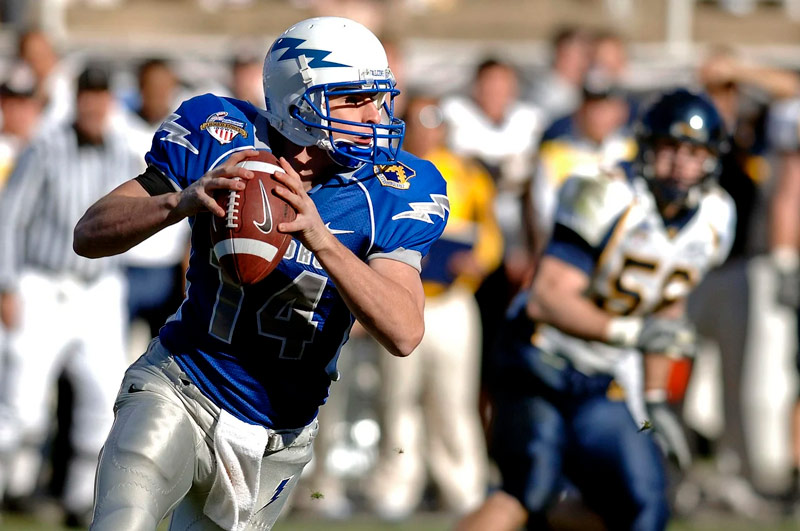 Defensive teams are not allowed to rush the Quarterback (QB) in 7 aside football, meaning there is no need for an offensive and defensive linemen in the game.

Although the offense will need a center or snapper to pop the ball up to the QB off the scrimmage.

The QB will then have five wide receivers to throw downfield, but remember, because QBs are not allowed to run with the ball, they only have four seconds to dispose of the football.

That means they’ll need to be very much in sync with their offensive receivers, who will typically position themselves against defenders to create height mismatches around the field.

We’ll come to 7 on 7 football plays shortly but let’s firstly talk about scoring.

Scoring works similarly to traditional American Football formats where teams must run the ball into the endzone to score.

In 7 aside football, a team earns six points for a touchdown. But as there is no kicking in this game format, teams will then have a shot to earn another single point by running the football into the endzone from the ten-yard line.

Unlike traditional football formats, defensive teams can also score points which keeps the game even more interesting. If a defender intercepts a catch or turns over the football, they will secure two points for their team while also regaining possession of the football.

That means defending is just as important as attacking in 7 aside football.

With no running plays allowed, the offense can only attack by passing the ball forwards to their wide receivers.

That means 7 on 7 football relies heavily on having a good QB and fast receivers who can find space and anticipate the movements of their opposition defenders.

Plus, with only four seconds to move the ball, you really need to focus on what plays you’re going to call to disrupt your defense.

If you’re looking for some inspiration on what 7 on 7 football plays to run against your opposition, check out our in-depth playbook guide for some of the best-attacking plays in this format of the game.

Briefly, here are two of our favorite attacking plays that can cause defenders some real headaches.

The Cut Run play is an excellent option if you’re looking to sneak another first down and need to move the football ten yards upfield.

With your two wingers transitioning upfield and cutting inside to run horizontally across the pitch, you have two options to hit the next down with a direct bullet pass into the center of the park.

But if the QB sees those players being too well covered, he can also throw it long to one of the other wide receivers transitioning deep towards the endzone. And although they remain an option, they are typically used to draw the defense away from the center of the park to your two target players in midfield. 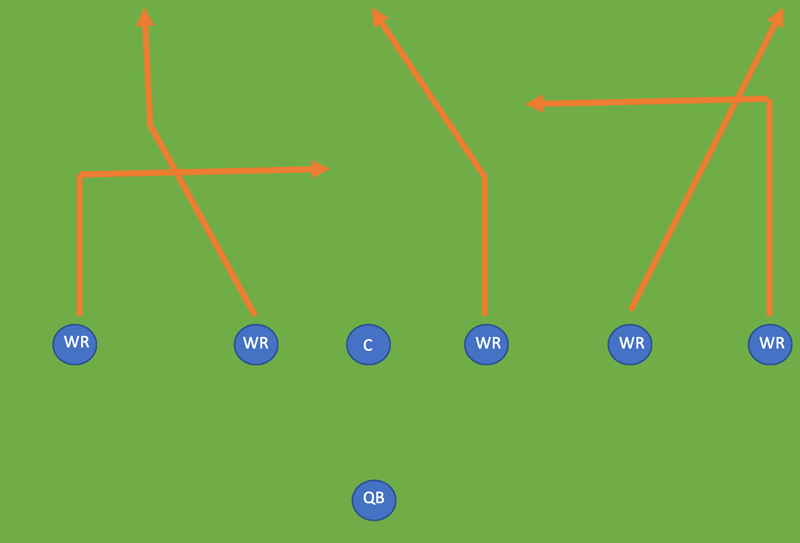 The checkout requires a little self-awareness from your wide receivers.

With a couple of the routes crossing over, your wide receivers need to time their runs pretty carefully to ensure they don’t bump into each other.

That also means this route is super confusing for any defenders coming up against this 7 on 7 football play and can cause some real problems for your opposition.

This play is very effective at stretching defenders to either flank of the pitch. The QB has multiple options to hit either a shallow checkout route or a corner route on the left side. In the middle of the pitch, the QB can also float a longball towards a receiver doing a fly route or throw to the corner flag to another receiver on a post route.

Other Useful Football Articles
Why And How To Tape Fingers For Football?
Flag Football Positions Explained
What Is A Touchback In Football [NFL & College]

As attackers try to score touchdowns, defenders also need to set up to contain their opposition and force turnovers.

As I’ve already said, defenders can score an additional two points for each turnover they make. Still, they also need to be careful not to concede penalties for pass interference or holding.

Non-contact football is tough to defend against, particularly when you’re up against tall receivers, so the first thing to note as a defensive coordinator is where your height mismatches lie. Put your best defenders against the opposition’s tallest receivers, and try to unbalance any mismatch they might play.

You’ll also want to figure out your defensive strategy before you face off against your opposition. Do you want to mark zonally? Or do you want to go man-for-man? 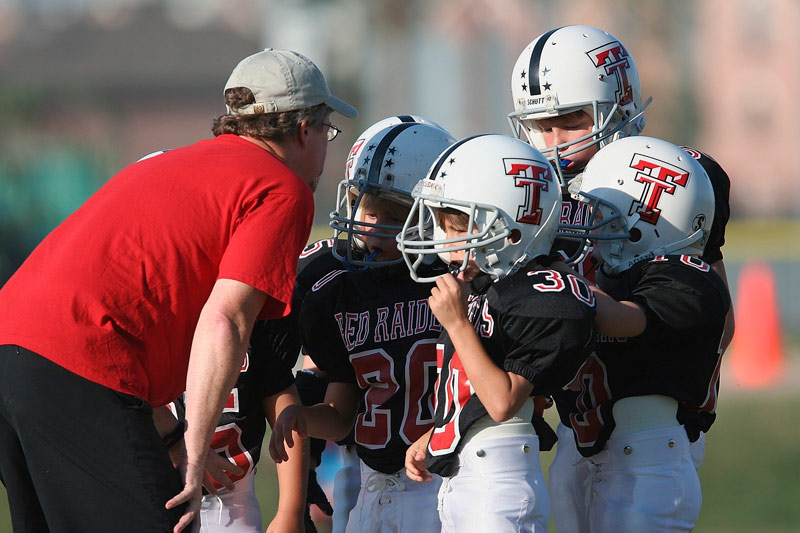 Personally, I don’t think zonal marking in 7 on 7 football works too well. With too many players in the outfield, it’s better to match your opposition player for player.

That way, when your opposition receivers attack your gainline, you can track them harder and reduce the number of yards they can make after they’ve caught the football.

Why You Should Play 7 On 7 Football

As football is primarily a winter sport, you’re going to need something to do during the off-season, right?

Here are a few reasons why you should start playing 7 on 7 football!

If you’re a footballer and looking to stay in shape over the summer months, 7 aside football is perhaps the best way to keep fit.

Despite the halves only lasting 20 minutes each, in 7 on 7 flag football, you are constantly sprinting from one play to the next. There are fewer and shorter stoppages, which means you’re competing at a higher tempo throughout the match.

This helps to keep your aerobic fitness at its peak during the hot months, particularly if it’s warm outside.

Especially if you’re a ball-carrying or passing player, the skills you pick up in 7 on 7 football will help you improve when it comes to 18 aside football. 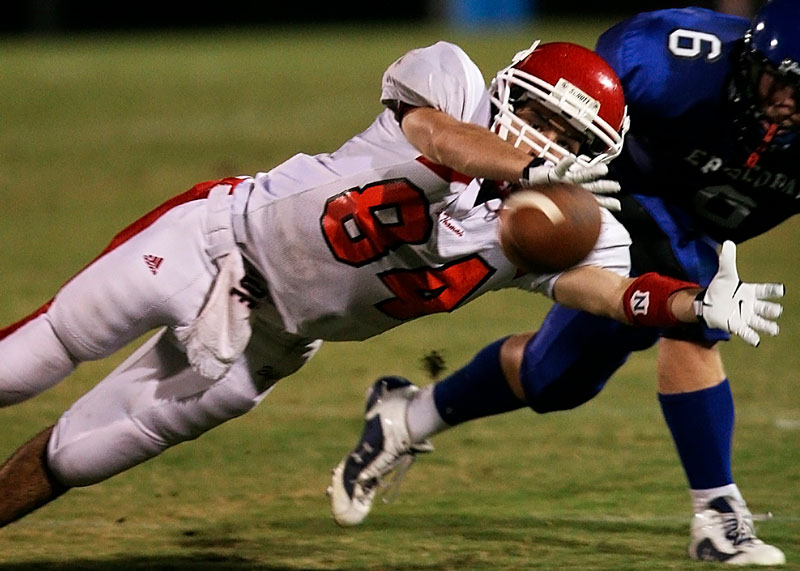 For example, 7 on 7 football is great for running backs as it helps them improve their footwork, catching abilities, and learn new running lines. It also challenges them to beat defenders more often instead of using their physical presence to run into or over defenders, which you might see in the classic football formats.

QBs can also develop a vast array of new skills too. With the ball in hand, they can hone in on their throwing abilities, learn new running routes, and practice passing in a more congested space on the seven aside pitch.

If you’re like me and had to retire from full-contact sports because of injuries, then this is the perfect format for you to keep playing the sport you love while avoiding any nasty bumps.

As there’s no contact allowed in 7 on 7 football, you’ll be able to stay fit, healthy and enjoy playing sports again, without the fear of sustaining any nasty injuries.

Socially seven aside, football is a great way to meet new people. Joining a league or a team can have huge benefits off the pitch as you’ll be able to connect with fellow football fans and enjoy socializing with them after the match.

So, if you’re looking to stay fit, improve your skills and meet new people, 7 on 7 football is a fantastic sport you should seriously think about picking up over the summer months.

There are hundreds of leagues and teams looking for players across the US, so grab your boots, find your local side, and get playing! 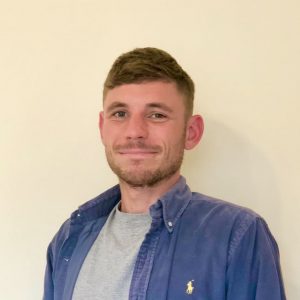 Ed Carruthers
Ed is a writer from London. He loves traveling and is a bit of a sports fanatic. When he’s not at his desk, he’s either kicking a footy around with his mates, watching his beloved football team Everton or is hacking around the golf course.
Facebook Twitter Instagram