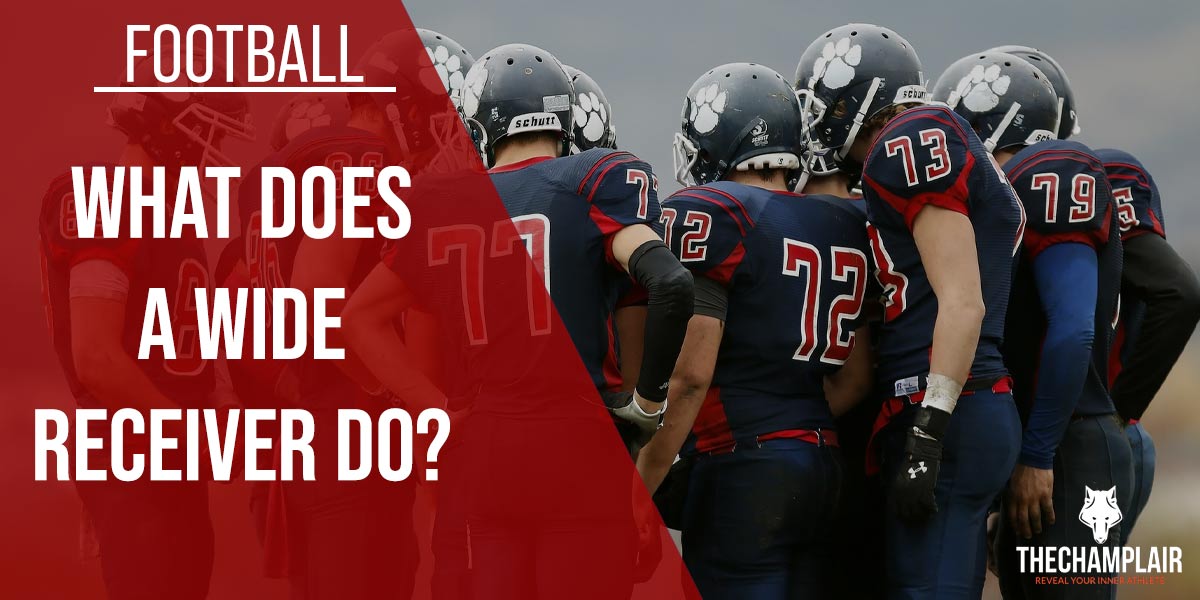 What Is A Wide Receiver In Football?

The NFL is a big play league.

Swimming in glitz and glamour, one of the major positions on the gridiron is the wide receiver. Probably behind only the quarterback as the iconic role in football, it sums up the excitement of America’s thrilling game.

The legs of the offense to the quarterback’s arms, being a wide receiver, requires searing speed, direct route running, and the ability to compete in every play. If you dream about making it to the big leagues as one, you should never let a college coach see you walking back after a play; hopefuls have to be in the zone at all times.

It’s a demanding position, but, oh my, it can be worth it. Your team can have the best quarterback in the world but, if he doesn’t have the runners ahead of him, you’re going to be asking a lot.

Sure, Tom Brady might be able to help you, but how many like him are there? Not many. After all, the thankful receiver can reap a plentiful harvest.

The marauding, breakneck speed from which they operate can seem like poetry in motion at any level – forget the NFL for a minute – but the position has to be treated with respect.

Anyone hoping to make their name there has to put in the work. Focus, don’t fumble, and run your route like a postal worker in desperate need of a toilet break.

A good coach’s job is to improve your game. Your job is to understand what you’ve got to do on the field, and this article will help. 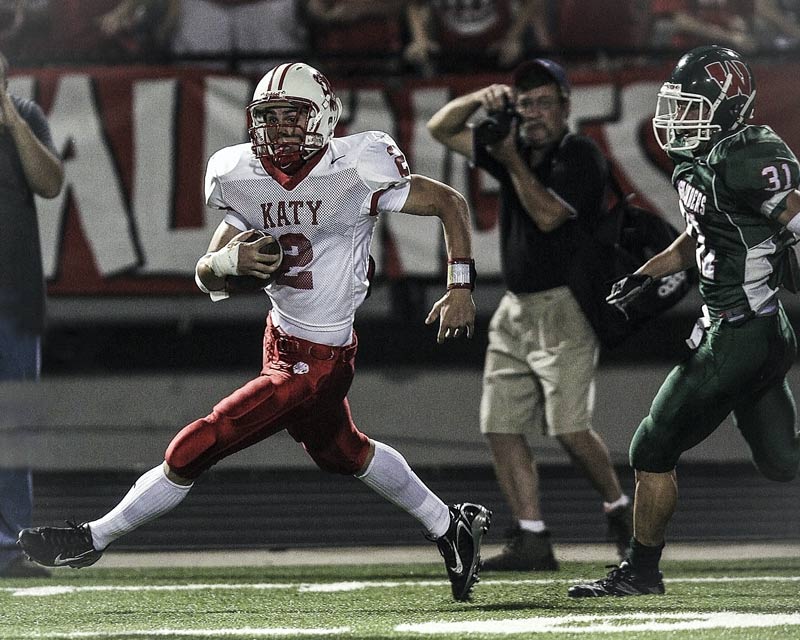 History Of The Wide Receiver

The wide receiver as we know it today actually grew from the traditional ‘end’ position.

As that role morphed into the modern ‘tight end,’ the boom for wide receivers came in the 1930s when Don Hutson of the Green Bay Packers helped exploit the space created by coaxing defensive lines away from running plays and into passing ones.

Before Hutson emerged on the scene, many teams wouldn’t use their wide players as potential receivers out of fear their position would see them run into danger too easily!

How strange is that to think now?

It took forty-years for anyone to break his record of 99 receiving touchdowns after his retirement in the 1940s. That’s how much fun he had putting this position on the map. Raymond Berry of the Baltimore Colts in the mid-1950s then took it up a level and helped plot the route tree as we know it today.

Crucially, the two-time NFL champion and Hall of Famer gave it a more cerebral and tactical quality, too, by applying his famous attention to detail, building one of the all-time great partnerships with Johnny Unitas.

Thanks to Berry’s work, route running and precise movements became more important than God-given speed, opening up a whole new avenue that many Americans have explored.

Moving into the 1960s, Lance Alworth posted two of arguably the most outstanding back-to-back campaigns a wide receiver has ever had in 1964 and 1965. During that glorious period, the Hall of Famer averaged more than 110 yards per game, a touchdown per game, and 120 yards per catch.

One of the most significant positional changes in football history, these guys were setting the standard years before Jerry Rice would redefine what it means to be a wide receiver with the San Francisco 49ers from the 1980s onwards.

Without them, some of the most exciting moments in football history may never have graced our screens.

Who covers the wide receiver?

Before we get into the nitty-gritty of what you’ve got to do on the field, it’s essential to look at what you’re up against.

Cornerbacks are your worst nightmare here.

They’ll be trying to contain you and, even if you get the catch ahead of them, a good cornerback will hang around like a bad smell to try and put you off your route.

Imagine them as the human embodiment of 2020 when you’re out on the field. You’re going to want to get away from them as quickly as possible, but they’re likely to hang around and make your life as difficult as possible.

You’d be hard-pressed to find a coach crazy enough not to put one of his fastest players here, considering the importance they hold in the defensive line, so getting past one is not going to be easy. They can tackle you. They can push you out of bounds. They can make your life, in general, pretty miserable.

Still, one of the most impressive sights in the game is a good wide receiver going one-on-one with a solid cornerback. It’s exhilarating at any level of the game. Considering how vital a wide receiver is, you’re going to be met by a safety even if you get around your opposing cornerback. The sole purpose of these guys’ standing in the game is to prevent the big play you’ll be doing your best to make.

Both areas in the defensive line will attempt bump-and-runs (which aren’t as fun as they sound, as anyone reading who’s been in one will tell you) to throw you off course and mess up the attacking play.

Party poopers, if we’re honest. They’re not going to make it easy for you.

Other Useful Football Articles
How To Keep Football Gloves Sticky?
How To Play Fantasy Football & How Does It Work?
11 Best Football Girdles

What does a wide receiver do?

As an eligible receiver, your job will be to make your quarterback look like a genius by proving to be the ammunition in that loaded rifle of an arm. Basically, you have to catch their passes and drive your team up the field like a wrecking ball.

Starting plays from a less-congested part of the field, think of their hands as cushions and their legs as car engines, being able to pluck plays from out the sky before setting off on their route.

When starting their dastardly plan to get away from the scrimmage line, their bodies tend to be in a specific position. With feet shoulder length apart and positioned like starting blocks, they’ll lean forward to help them explode off the snap.

Oh yeah, we probably should mention that scoring touchdowns constitute a significant part of the responsibility.

Burning hot off the press and using either explosive speed or smart movement to get away from the traffic, there’s glory in being a wide receiver. Coaching speed into a player is nigh on impossible (though it can be done with LOTS of hours of high-level practice), but good wide receivers – in the mold of the great Raymond Berry – can get around not being blessed by learning defensive plays and spotting gaps.

Even when the play from the quarterback isn’t on, they have to be willing to block, protecting whichever ball carrier from the defense like a mobile band-aid.

We’ve got to talk about the different subsections in this most glorious of roles.

Like any great art, there’s a particular nuance to being a wide receiver, and it’s essential to note exactly what job each type has to do to get a team functioning correctly. A split-end will usually start furthest away from the scrimmage line on the flank opposite the tight end and should expect to receive the most passes of any wide receiver. Speed is your game here, as the general requirement is to surge deep at short slants.

A flanker would line up behind the line and deeper than the split-end – roughly around four yards from the last player in the line – and run a different kind of route. Here, you’re going to want someone capable of catching passes in the middle who boasts the agility to make the opposing defense look stupid.

Finally, the slot-back is largely seen when a coach decides on a flexbone or triple-option offense, needing to rely on their typically bigger physical frame to make sure they’re at home when starting within the initial line.

A wide receiver’s main job is to activate a team’s passing game and gain their team yards off the snap.

Make the right runs, and a self-respecting quarterback will have no excuse not to find you. If you can get open and push up through the gridiron, you’ve done the primary part of your job. Wonderful.

With touchdown and playmaking opportunities naturally coming from breaking away from the line, lining up there can lead to big plays, and, let’s be honest, that’s exactly what we – as lovers of this great game – want.

Speed and strength are one thing, but any good wide receiver will boast intimate knowledge of their team’s playbook to hit the right routes at the right time.