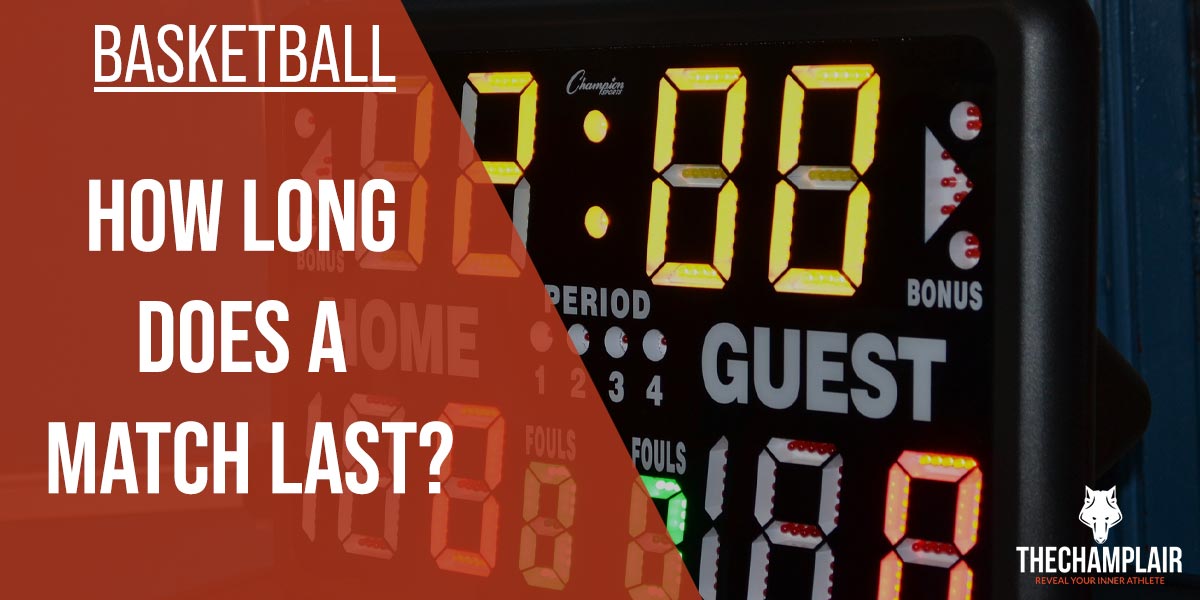 How Long Does A Basketball Match Last?

It’s essential to be well-familiar with basketball’s intricacies, whether you are a player or a fan. And one of the things you need to have a solid grasp on is basketball game duration.

How long is a basketball game? There is no universal answer because rules differ between leagues and associations. To get the most relevant info, you should check out the rulebook of the association you play under.

Below, I’m going to look at game durations as per FIBA, NBA, NCAA (college), and NFHS (high school) rules. I’ll also slightly touch upon the shot clock and timeouts because these are very important in basketball.

How Long Are NBA Games?

NBA games have four periods, each lasting 12 minutes. Aside from that, NBA rules allow for 5-minute overtime.

On its website, the International Basketball Federation (FIBA) provides a neat comparison of FIBA, NBA, and NCAA rules. I’ve taken everything related to basketball game duration and periods from the comparison and plugged them into the table below:

With that, the duration of an NBA match is 48 minutes, plus the 15-minute halftime.

But when it comes to the actual duration of basketball matches, NBA games – and basketball games of any other league – can last much longer due to frequent clock stoppage. The typical NBA game lasts for two and a half hours.

One thing to note with NBA timeouts – as of this post’s writing, FIBA’s comparison table was Outdated. As per 2019-2020 rules, each team is entitled to:

The rules have other details regarding timeouts, but I won’t cover them in this post.

Since the 2017-18 season, all NBA timeouts have been 75 seconds in length, replacing the old short and long timeouts.

What Was The Longest NBA Game?

If you wonder what the longest NBA game was, it took place on January 6, 1951, between Indianapolis Olympians and Rochester Royals at Edgerton Park Arena in Rochester, New York.

This match’s game time was 78 minutes, and the game was won by the Olympians 75 to 73. This was a six-overtime game, and it has even been included in the Guinness World Records.

The longest college basketball game in history was slightly shorter, but it’s impressive nonetheless. It occurred on December 21, 1981, between Cincinnati Bearcats and Bradley Braves and was won by Bearcats 75 to 73.

The match ran 75 minutes – a mere 3 minutes behind the historic Olympians vs. Rochester Royals. And interestingly, this basketball game gave birth to another record. Cincinnati guard Bobby Austin and Bradley center Donald Reese each played 73 minutes on the court – a record that stands to this day.

What About College And High-School Basketball Games?

College basketball game is regulated by the NCAA (National Collegiate Athletic Association) and consist of two 20-minute halves. There is a half time of 15 minutes between the halves as well.

How Long Is A Basketball Quarter?

The duration of a basketball quarter depends on the league and association that the game is held under. I’ve had a look at quarter durations earlier, but in case you’ve jumped straight to this section to find answers, here they are:

When Does The Clock Stop?

The clock is stopped whenever the official’s whistle sounds, which may be in the following cases:

What Is The Shot Clock?

In basketball, the shot clock shows the amount of time a team has to score a legal shot after gaining control of the ball.

The shot clock starts when the team gains possession of the ball. The ball must have left the possessing player’s hand before the shot clock time has elapsed. So if the clock sounds while the ball is still in the air and the ball goes in, it will be scored.

If the shot clock runs out before the possessing team attempts a goal, the team will have committed a shot clock violation, and the possession of the ball goes to the opposing team.

A Word About Timeouts

Each basketball team is entitled to a limited number of timeouts during the game. The timeouts allow:

There are many more intricacies to know about with timeouts, like mandatory timeouts in NBA or timeout carryover rules. Make sure to check out your association’s rulebook to know what you are dealing with.

Hopefully, you now precisely understand the time rules of basketball!

I actually didn’t cover absolutely everything there is to know in order to keep this guide short and simple. Besides, rules change very fast, and my main goal was to provide you with guidance as to where you should be looking for official basketball rules.