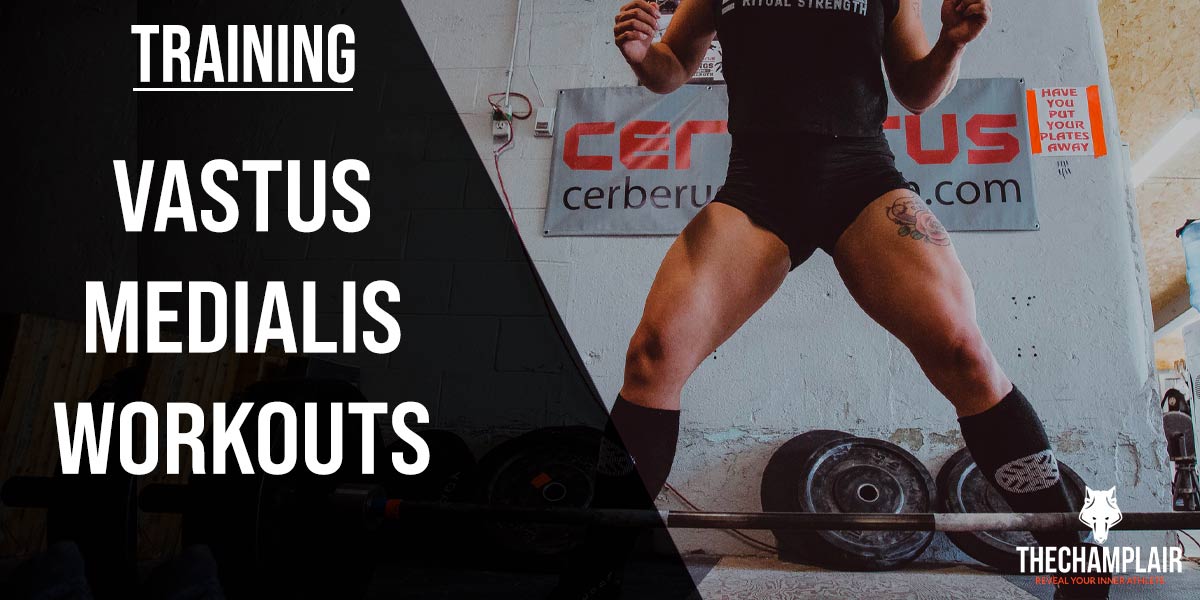 For those of you who take part in active exercise, competitive sports, or have a general interest in the human anatomy, you will have come across the term quadriceps – or at least you should have.

Now, if you aren’t aware of your quadriceps and you thought it was an extinct race of dinosaurs, you’re about to be hit with a stark awakening. Your quadriceps, in short, are the muscles that make up your thighs – four muscles in each quad, to be exact. These muscles are referred to as the below:

Throughout this article, we will be dissecting the Vastus Medialis more specifically, without going into too much detail regarding its supporting counterparts mentioned above.

This muscle’s primary function is to work collectively with its surrounding muscles to straighten the knee and efficiently extend the leg. For many people, it’s an area that’s substantially weaker than the rest due to improper training or activity. As a result of this, their knee’s strength is also compromised, along with their ability to train lower body exercises effectively. This, my friend, is not good.

Let’s say the VMO wasn’t there; now, given the natural design and shape of the knee, it would mean the kneecap or patella would move marginally to the outer side of the knee as we bend our legs. As a result, excessive friction would occur via the cartilage lining at the rear of the kneecap, thus increasing the likelihood of dislocation in this area.

But where’s the controversy, you may ask?

Many physiotherapists widely accept that the VMO is an independent muscle. On the other hand, some anatomical experts believe the VMO is not a separate muscle but a part of the Vastus Medialis. However, for this article, we will accept that both are just as important as the other as they work hand in hand to complete any day-to-day functions.

Maybe they should joust in honor of their opposing views, and the winner gets rights to the definition? Just a suggestion.

Benefits Of Training Your Vastus Medialis

Vastus Medialis training is essential for anybody that requires a healthy degree of functionality and strength in their lower body – which is pretty much everybody.

Although we can’t necessarily train this muscle without incorporating the rest of the quads, we can still emphasize this area, so it gets some extra stimulation.

There are many Vastus Medialis strengthening exercises that we will discuss in later detail but for now, let’s discuss how training this muscle can benefit you in everyday life.

Vastus Medialis training prevents injury, but it’s also essential for improving any athletic movement such as; running, jumping, and lunging, even more so when conducting unilateral exercises requiring a greater degree of stability and control.

The above movements are explosive, which means they rely on fast yet powerful muscle contractions. With that said, if you choose to perform them knowing your quads are weak and underperforming, you could be setting yourself up for imminent injury.

Sometimes looking good is the goal. I mean, what’s the worst that can happen if you have a chiseled set of tree trunks? Maybe you tear an old collection of shorts that weren’t designed for your new Quadzilla legs?

Training your quads enables you to enhance your lower body’s overall appearance by bringing those bulging muscles to the surface. However, you will need to consider changes in your diet and your training to see a significant improvement, no pain, no gain!

It’s vital to ensure the VMO gets the stimulation it needs to avoid bouts of weakness or misfiring from taking place. This is the last thing we want as a weak or misfiring VMO can lead to various debilitating injuries relating to knee pain, knee instability, and potential dislocation.

So, without further ado, let’s get into some insightful Vastus Medialis and Vastus Medialis Oblique exercises to help avoid injury and increase overall functionality in your lower body.

Other Useful Training Articles
The Dumbbell Rear Delt Fly
5 Methods To Do Leg Curls Without A Machine From Home
How To Do Triceps Pushdowns?

The split squat is a fantastic unilateral exercise that will drastically help strengthen your Vastus Medialis and VMO. For this exercise, please ensure you have enough training experience and strength to perform it without causing injury, as it’s all about slow-controlled reps!

If you want a starting point on how to strengthen your Vastus Medialis, then look no further. Step-ups are a fundamental exercise that can be altered and performed for anybody that wants to add to their Vastus Medialis training. Although it’s a unilateral exercise, you can swap and change your elevated surface height to meet your level of difficulty. This makes it an excellent exercise for people of all abilities and ages.

Squats are one of the best compound exercises to grace the fitness world and are especially beneficial for Vastus Medialis strengthening exercises. They help develop our posture, our stability, our lower body strength, our core strength, and the list goes on.

You can perform many different squats, such as the back squat, overhead squat, front squat, and the Jefferson squat. All of which have slightly different benefits than the other, but for the sake of Vastus Medialis training, we will be looking at the pause squat.

Leg extensions are one of the very best Vastus Medialis isolation exercises out there due to working nothing but the legs. Although it does incorporate all muscles in the quadriceps, it does place great emphasis on the Vastus Medialis and VMO precisely.

Nearly all gyms will have a leg extension machine that’s very easy to use, and you can flip between weights as you deem necessary. However, if you don’t have access to a gym, you can still perform this exercise via a standard dining chair. All you have to do is attach a stretchy resistance band to the chair leg, place your foot through the other end of the band, and you’re good to go!

I’m sure you’ve heard of the lunge before, am I right? Well, have you ever considered the side lunge? Perhaps not, but let me tell you why incorporating the side lunge into your Vastus Medialis training can help strengthen that teardrop in no time.

The leg press can look like an intimidating machine to novice gym users, especially when the bigger guys max the plates on them. But let me assure you, it’s a staple piece of equipment that everybody should be using regardless of experience, as it’s one of the best Vastus Medialis strengthening exercises you can perform.

So there we have it. We’ve finally reached the end of our Vastus Medialis training. We hope you gained some valuable information from this article and implement it accordingly to your future routines.

Lastly, it’s crucial before conducting these exercises that you know the movements and perform them correctly, especially with activities such as the leg press. You must handle this machine with great care due to the safety levers as an unfortunate mistake such as forgetting to clamp the levers down will result in serious injury. Not only this, but you must ensure the weight you’re using can be handled safely and efficiently above all else.

Who would’ve thought the Vastus Medialis and VMO played such a vital role in our everyday life, aye? Now you know how much of a pivotal role they both play, it’s time to bookmark this article, take notes, or do whatever it is you do to keep it close at all times to keep referring to it if needed.

Jordan Perrins
Jordan has a BSc in Applied Sports Science and has been an avid fitness freak since the beginning of time. He also has a peculiar OCD tendency where he must organise eggs in a carton so the weight is evenly distributed. He does this all whilst listening to his beloved hip-hop.
Facebook
Twitter
Instagram