Every tennis player deserves good things in life, including a fantastic racket. But choosing a racket that will give you the power and drive you need to be a champ is challenging.

With the abundance of racquets nowadays, finding the perfect fit for your playing style is more tasking. Despite every racket manufacturer’s lofty promise, you still need to investigate how many of those promises are valid compared to the racquet’s in-court performance.

Since most racquets boast enough functionalities to enhance our playing experience but rarely deliver, I’ve had to check out the Wilson Clash 100 racquet. Guess what I found.

I discovered this racquet performs just as expected and improves one’s playing experience. That discovery led to this review. Below are the impressive hard-to-forgo wonders of the Wilson Clash 100 racquet. 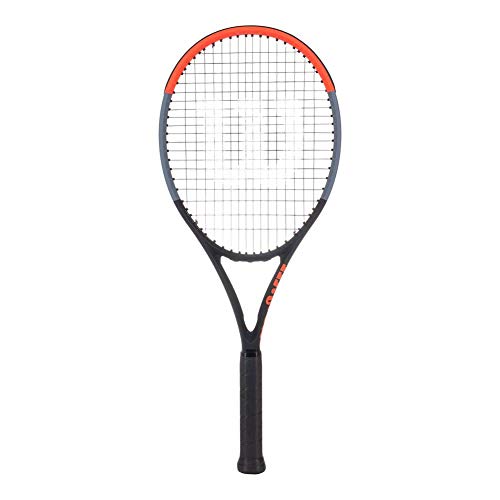 Maybe you have heard from your fellow players about an excellent tennis racquet that catapults one to another playing level? Well, the racquet in question probably is one of the Wilson Clash series products. This line of tennis racquets is known for its cutting-edge technology that is sure to fulfill the various playing needs of players and stakeholders alike.

Wilson Clash 100 is the latest product in this racquet series. It is specially built to suit all playing styles without leaving any chance of inconvenience. With the introduction of the remarkable FreeFlex technology, this racquet enhances easy pocketing and control of balls.

What about its new StableSmart frame geometry feature? It gives the Wilson Clash 100 the right level of stability without tampering or reducing the racquet’s power.

Think of different players coming from different tennis backgrounds and how varying their playing levels would be. Of course, each would have different tastes and desires, the same as differing standards. But if they are all asked to mention what a perfect racquet looks and feels like, there would be similarities in their answers no matter their individual differences.

Again, every perfect racquet has distinguishing features that set it apart from others in its class. The Wilson Clash 100 is one of those ideal racquets that has been tested and certified by many players at different playing levels and with varying skills. It is proven to be effective regardless of the player’s style or behavior on the court.

Players at different levels agree that its handling, stability, and power are impressive for their weight. The similarities in the experience of different players who have played with this racquet make it stand out and worthy of all the commendation I can lavish on it.

Beyond all reasonable doubt, Wilson Clash 100 is a testament to Wilson’s quality and reputation. Its name is deeply etched in the rock and hallmark of the twenty-first century’s best tennis racquets.

Wilson clash 100 is 27inches (68 cm) long, and its head size is 100 square inches. With a total weight of 295kg, its power and control are enhanced and tuned for action. Even if you have played for a long while, this will quickly help you find your balance after a few trial shots.

If you match its strung weight of 11 ounces/312g to its 312 swing weight, you get a powerful tool for any player that desires impressive acceleration.

The string pattern consists of 16 mains and 19 crosses, which offer enough hitting spots and allow excellent energy transfer. As the ball finds its rightful place on the strings, players can decide on how powerful and accurate they need the hit to be.

In addition to all its impressive features, this racquet has also been found to have one of the lowest and arm friendly flex points amid other racquets in the market. Each of these features adds to the overall performance of Wilson Clash 100 in terms of pocketing, control, and touch, thereby giving it a deserved spot among the best.

Like every other tool for every other business, the materials used are a significant defining factor. This racquet is composed of graphite, giving it a strong form and relatively lightweight. It ensures that shock and vibration do not get to your arm and shoulders.

The racket includes FreeFlex and StableSmart, which guarantee you can have ultimate control and the best possible experience to cap it off.

As you aim at a goal, the carbon frame enhances your accuracy and consistency. And with the StableSmart features, your excellent stability and power are maintained.

This means you have all flexibility and stability at their maximum level, without necessarily sacrificing one for another. Great, isn’t it?

The end product of all these features is better flexibility, strength, durability, not leaving out a superb feel for these modern times.

The Wilson Clash 100’s aesthetically sound design features clean lines, an elastic finish, and fantastic colors. It comes in black, grey, and neon options, giving players the chance to choose their preferred color. This racquet is the right fit for players who appreciate the effort that goes into not just manufacturing a tool but creating an attractive one at that.

Beyond the hype and commendations, Wilson Clash 100 excels in its output and performance. Some players could pay double for the powerful shots it delivers. Others commend the ease with which it is maneuverable with every stroke of the ball.

This racquet gives players of all ages and styles the confidence they need for each game. With a tight grip, you can go for the ball at any angle. It is also comfortable for players with minor injuries—they can easily swing and hit excellent shots at about their maximum capacity with little or no pain incurred.

It also caters to the needs of players who prefer less body strain or desire consistent power and spin boost with little effort.

Some players have observed that even though this racquet may be a bit lighter than its closest competitor, it does not affect its power and spin in the slightest. You can fire multiple groundstrokes that travel as much distance as desired beyond the baseline.

While heavy racquets are trusted for more power and less speed, lighter racquets touch down on more speed, less energy, and less stability. But with Wilson Clash 100, you can simultaneously eat your cake and have it.

Your service shots can be easily pumped with enough speed and power. It makes the tennis court your ‘playing’ ground and territory, as you serve and return balls with relative ease. Whether you are playing the defensive or offensive, you have the right weapon in terms of control, power, and spin to down your opponents.

Do you know the Wilson Clash 100 is another bold addition to the Wilson Clash series? It lavishes players with an extraordinary tool for all the ease, feel, speed, spin, and flexibility they deserve on the tennis court?

Yes, the racquet is a product of one of the newest technologies in the racquet manufacturing industry, blending power and speed conveniently. It is good news for players seeking to perfect their playing styles without missing out on the right touches.

Many players have chosen this racquet for its quality, affordability, ultra-flexibility, and maximum performance. What else is worthy of your money and trust, if not such a fantastic racquet?

Some racquets have been said to tone down or reduce some functionalities for another, thereby leaving players with ‘half-baked’ racquets that slow down their playing progress and performance.

But Wilson Clash 100 does not belong in such a category. The racquet successfully combines all of the excellent features into a compact and useful tool that enhances one’s playing experience.

Have you discovered the essential features every good racquet should have? Or do you believe some racquet functionalities can be sacrificed to make room for others? Are there any of such features you can play successfully well without? Do well to air your opinions in the comment section.

Related Posts
Looking For The Best Sunglasses For Tennis Players? Look No Further!
The Best Ball Machines For Tennis
Tennis Racket: Babolat Drive Max 110 Review
Kevin Fitzgerald
Kevin Fitzgerald is a tennis coach based in Fort Lauderdale, Florida. Kevin was introduced to tennis by his father at the age of 3. Tennis quickly became a passion, and he started coaching at the early age of 16. Kevin now writes for several tennis related blogs and magazines.