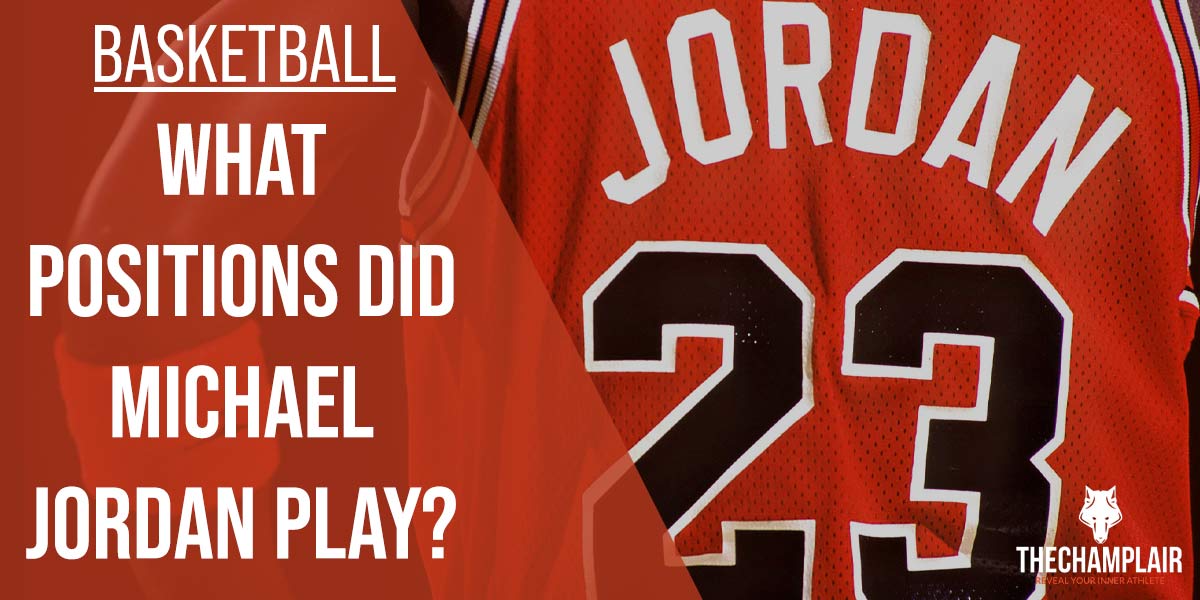 What Positions Did Michael Jordan Play During His Career?

Over no sport does a figure as large as Michael Jordan loom on a day-to-day basis as basketball.

The most iconic baller of all time, kids and adults alike have shouted his name while attempting some of his trademark moves. As you can imagine, that gets less and less funny every time you hear it as a coach.

Still, they say imitation is the greatest form of flattery, and, of course, the GOAT is worthy of such praise.

However, perhaps it’s necessary for many of the younger generation to paint a clearer picture of what exactly Jordan was.

While a hugely prominent figure in sporting history across the globe, we’re getting further and further away from his last NBA appearance in 2003, so a reminder may be in order.

After all, the rip-roaring success of The Last Dance Netflix series has brought his actual career back into public consciousness (if that’s not too sacrilegious a statement), so an examination of what made him great rather than his greatness seems a good idea.

For newcomers, too, who’d love to know more about our great game’s greatest of all time, it’ll be good to refresh our minds. And relive some of those moments.

Considering the ridiculous physical prowess of his ‘His Airness,’ he was always the perfect shooting guard.

Considering the glitz and the glamour of his ridiculous achievements with the Bulls, I often find young players actually forgetting what that particular job entails – scoring points. That is the primary role for a shooting guard and not one we should forget when waxing lyrical about Jordan’s career.

He was, first and foremost, a deadly shooter. Recording a ridiculous average of 30.12 points a game – a tally so high it even beat that of the great Wilt Chamberlain’s – his ability to find the target is legendary.

A five-assist per game career average proved he could expand on the usual requirements of a two and that position is where he found most of his success.

Even aside from the silverware he won in droves, playing there also brought one of the most celebrated sporting moments in NBA history, with Jordan hitting that shot on Craig Elho when the Bulls dramatically beat the Cavaliers in 1989.

When he jumped to hit that shot, the world – and the game – had changed forever by the time his sneakers hit the court again.

Father Time might come for us all, but Jordan seems to be one of few mortals (though it’s hard to convince any of my players he’s one of those) who can push back against age’s turning tide.

Coming out of retirement in 2001 to bless the Washington Wizards with his supreme talents, he moved to the three and took some of that deadly scoring ability into being a small forward.

From a coaching perspective, one of MJ’s most remarkable traits was his defensive work. Obviously, that’s more important at the three, and it’s something any coach worth their salt will stress that at practice. No matter the level.

Despite losing some of his famed explosiveness, his ridiculous shooting skills remained on point, and the foray into a new position showcased how good (that word doesn’t seem to do it justice) at fade-aways.

ESPN summed that particular skill up better than anyone. The words ‘efficient’, ‘beautiful’ and ‘unguardable’ describe so much of Jordan’s career, but that fade-away allowed him to keep coming up clutch.

If you want to get better, watch Jordan at the Wizards.

In all honesty, Air Jordan probably could have made any position work for him. He was just that good.

Back in the 1988-89 season, he pretty much proved as much too during a brief spell as the Bull’s point guard.

Not only was Jordan blessed with freakish physical qualities, but he also demonstrated the sharpness of his tactical mind and his leadership ability when given the keys to the team.

It seems strange to discuss Jordan as a point guard, but, like most things in life, the GOAT made it work.

Still, basketball would look very different now had he stayed there, and fans (as well as the franchise itself) across the globe must be thankful the Bulls brought him back to the two.

Where would we be without him there? A much less enjoyable place, that’s for sure.

MJ’s status as the GOAT may have been earned during his time as the Bulls’ best ever shooting guard, but it was his work in other positions that proved this baller knew more about basketball than pretty much anyone else who has ever laced up a pair of sneakers.

The game’s greatest ever player, this shooting guard could do it at the three and even as a point guard.

Justin D. Johnson
Justin is a PhD student at Stanford University and has been a basketball youth coach for over ten years. He is passionate about sports, cinema, astronomy, and sharing knowledge.
Facebook
Twitter
Instagram