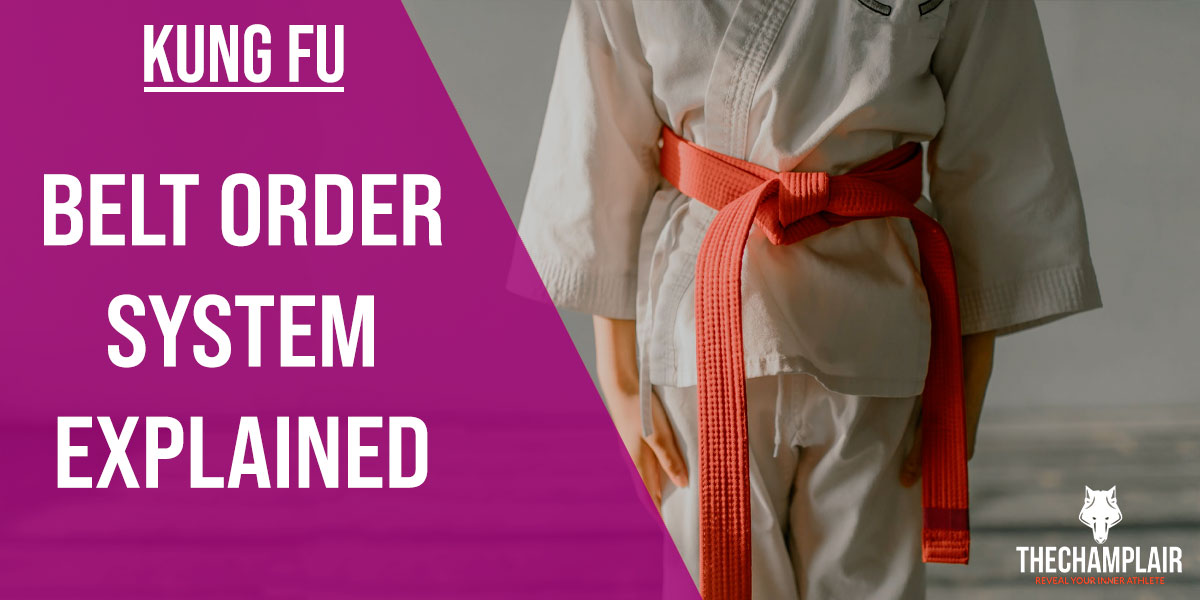 Chinese martial arts, kung fu or wushu,  use color-coded belts or sashes based on skill and expertise to rank those who practice it.

The belt system may vary depending on the specific type of kung fu. Keep in mind there are over 400 types and subtypes of kung fu. Also, schools are free to choose their criteria and belts, but generally speaking, they stick to the traditional 10 degrees going from the white belt to the black belt.

We’re gonna take a deep dive into the kung fu belt system to see what each color says about the martial artist wearing it, but first, let’s go over the very concept of kung fu very briefly to avoid confusion along the way.

Outside of the martial arts community, there’s still a bit of mix-up regarding the term kung-fu.

For starters, the term kung fu –or gongfu– is not limited to martial arts. It translates to “a high level of skill achieved over time with effort,” which means anything achieved with a lot of hard work could be considered kung fu, but the term has become widely associated with Chinese martial arts. The generalization doesn’t stop there.

Most people still assume it’s this very specific martial art based on how a particular set of animals move, but that’s one of the many types of kung fu.

If you were wondering, we’re referring to the Shaolin Kung Fu, which can certainly be divided into the classic Five Animals styles: the Tiger, the Crane, the Leopard, the Snake, and The Dragon. Other styles include The Praying Mantis, The Monkey, and The Eagle. But again, these are just styles of one type of kung-fu.

In reality, wushu encompasses all Chinese martial arts, such as Shaolin Kung fu, Tai chi, Baguazhang, and Wing Chun, just to name the most popular ones.

Why is this important? If you’re planning to become a black belt kung fu master, you’re going to need to be more specific and choose a specific type of kung fu. To add to the confusion, most types of kung fu incorporated the same belt system as other martial arts, like karate and judo, which are Japanese, and therefore, not Kung fu.

The kung fu belt order may vary depending on the specific type, but it’s usually divided into three stages, each divided in degrees.

As you probably already know, the black belt is the highest in the color order, and it’s earned by the most experienced practitioners, but there are other 9 belts they have to earn before donning the black sash, starting with the white belt.

It usually takes 4 to 5 years to clear all nine degrees to get to the black belt, and though students are bound to pass on the knowledge, the black belt is the main requirement they must attain to officially become teachers.

These first four degrees are all about the fundamental stances, blocks, and strikes. If it’s an indoor school, students will be taught some of the esoteric aspects of their particular type of kung fu in detail, though outdoor schools are also known to explain the philosophical to some extent. You’ll notice each rank and color is accompanied by its principle or value. 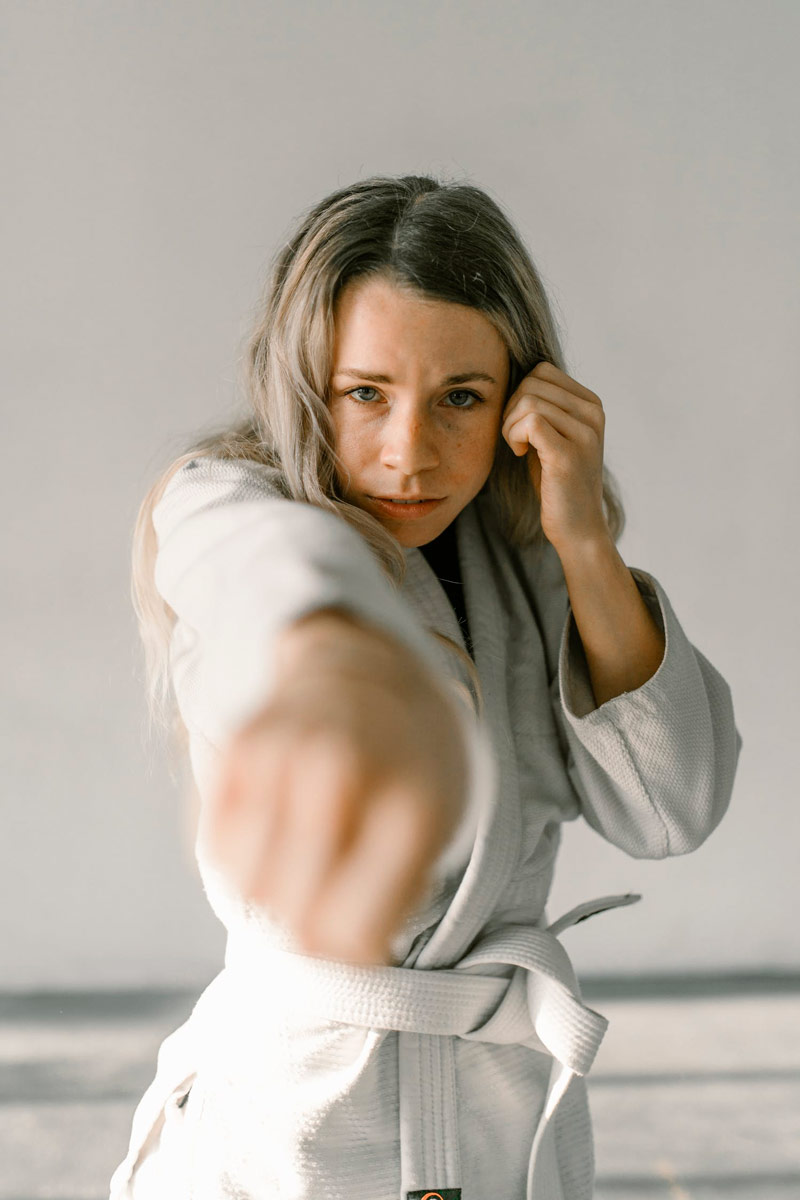 All 1st-degree kung fu students start with a white belt. Back in the days, they would dye their belts with darker colors as they progressed through the ranks, which explains why the last belt is black. There’s no need for dying the belt anymore, but the tradition of color-coding is still used to this day.

Every color symbolizes something more than just the student’s rank, usually abstract concepts such as growth and ambition going up through the ranks. In the case of the white sash, it reflects the new student’s innocence and symbolizes the start of something new, like a blank canvas. 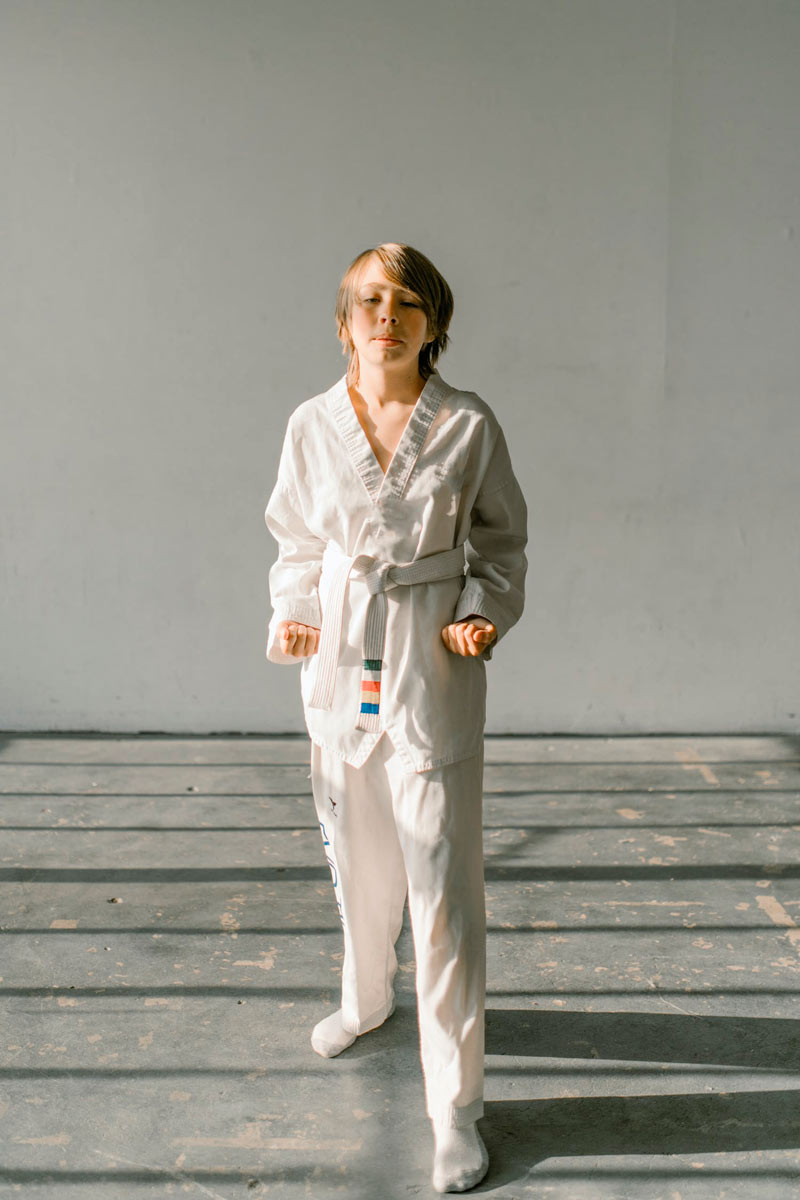 The white belt is not even considered to be part of the novice stage. Developments in skill and personal growth start to show with the yellow belt.  It is celebrated as the first step into a path of wisdom, discipline – and looking cool.

The yellow belt marks the start of the student in the novice stage, and it’s followed by the gold belt. The yellow color symbolizes the first rays of sunshine at the dawn of a brand new day. It captures the student’s first displays of their newly acquired skills. More importantly, it represents a desire to learn more accompanied by many questions.

A yellow belt might have committed the basics to memory in a relatively short time, so they must dedicate a lot of time smoothing out the rough edges of their form.

At this stage, students have already crossed the threshold between curiosity into genuine interest, which is represented in a darker shade of yellow generally accepted as “gold.” While still fundamental, attention is shifted from the choreography of the taolu (form) to Sanda (combat) moves.

Not every school includes the gold belt in its programs. It’s often used as a transitional rank in which students have proven themselves proficient with the fundamentals but may still need to work on the introductory set of moves that comes with the orange belt.

The orange belt symbolizes determination; something students will need to put up with a more demanding practice of everything learned thus far. Students with an orange belt have been refining their skills for a while now, and so, their moves are cleaner and more fluid. 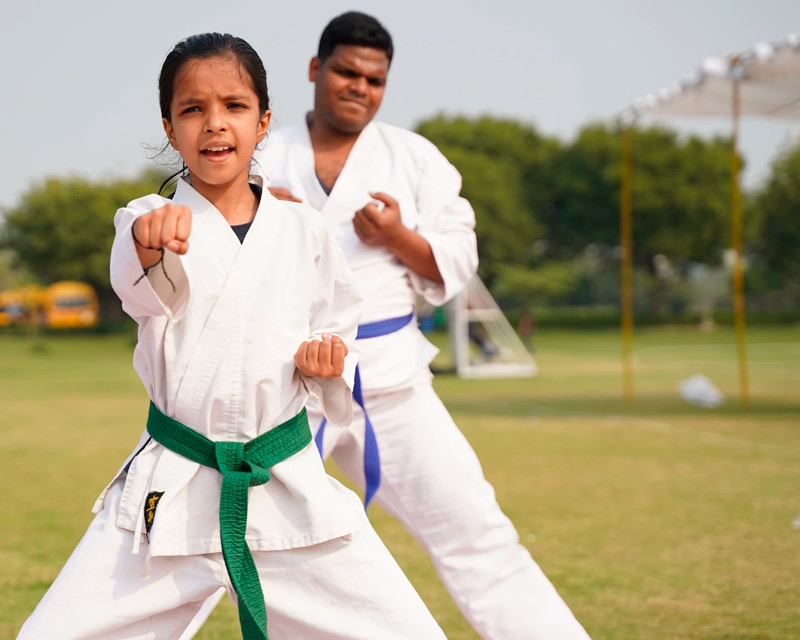 Training becomes a little more challenging as novices enter the intermediate stage with the green belt. At this point, intermediate students might start working with weapons and even take a novice under their wing. After all, students who take their career in kung-fu seriously are expected to become instructors at some point.

Assuming the type of kung fu you’ve chosen already offers training in weapons – like the Tao Te Kung Fu, for instance– this level will expand from the use of a single weapon to either a two-handed weapon or a dual set of one-handed weapons.

Green, the color of growth and development. Like the seed that sprouts into a plant, the student has also grown from the foundation laid in the first few degrees as a novice. Depending on the specific type of kung fu that you chose, this rank qualifies the student to start training in the use of intermediate weapons such as nunchucks or the jo staff.

The blue belt is a symbol of serenity and patience. Donning this belt means the student is ready for more training focused on control and learning how to slow down.

The purple belt captures the sky at dusk just before a new day the same way students enter the last stage of intermediate training before moving on to the advanced degrees.

Students at this level have grown more and more confident, and it shows not only in their prowess and skill but also in their ambition. 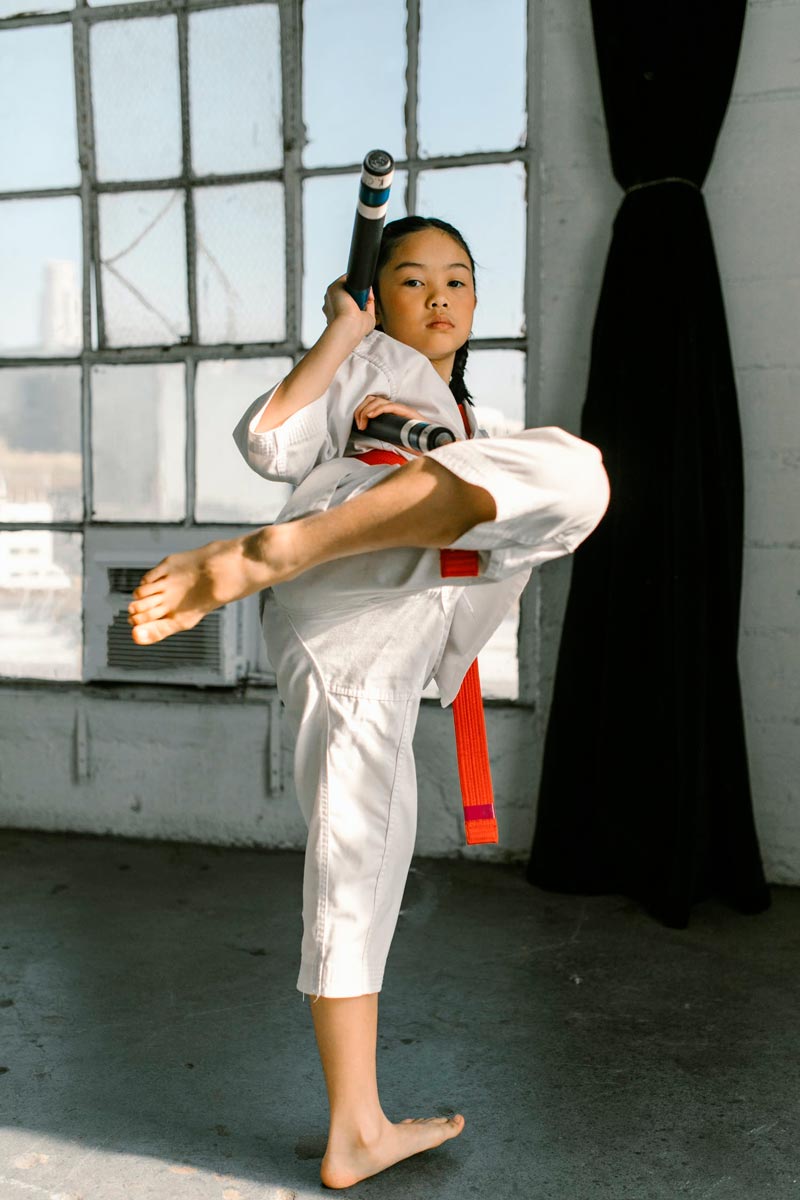 The fundamentals are internalized and refined. Students are now ready to move into more complex techniques and concepts. We leave basic training behind and embrace more demanding drills, more powerful and precise moves, strikes, and blocks. Being at this level requires a good understanding of the philosophical pillars of kung fu.

The brown belt symbolizes the stability of the ground and reflects the student’s firm grasp of his abilities and discipline.

The red belt is a symbol of leadership that students get to wear as they pass on their knowledge to students of their own. Red also embodies energy and courage. 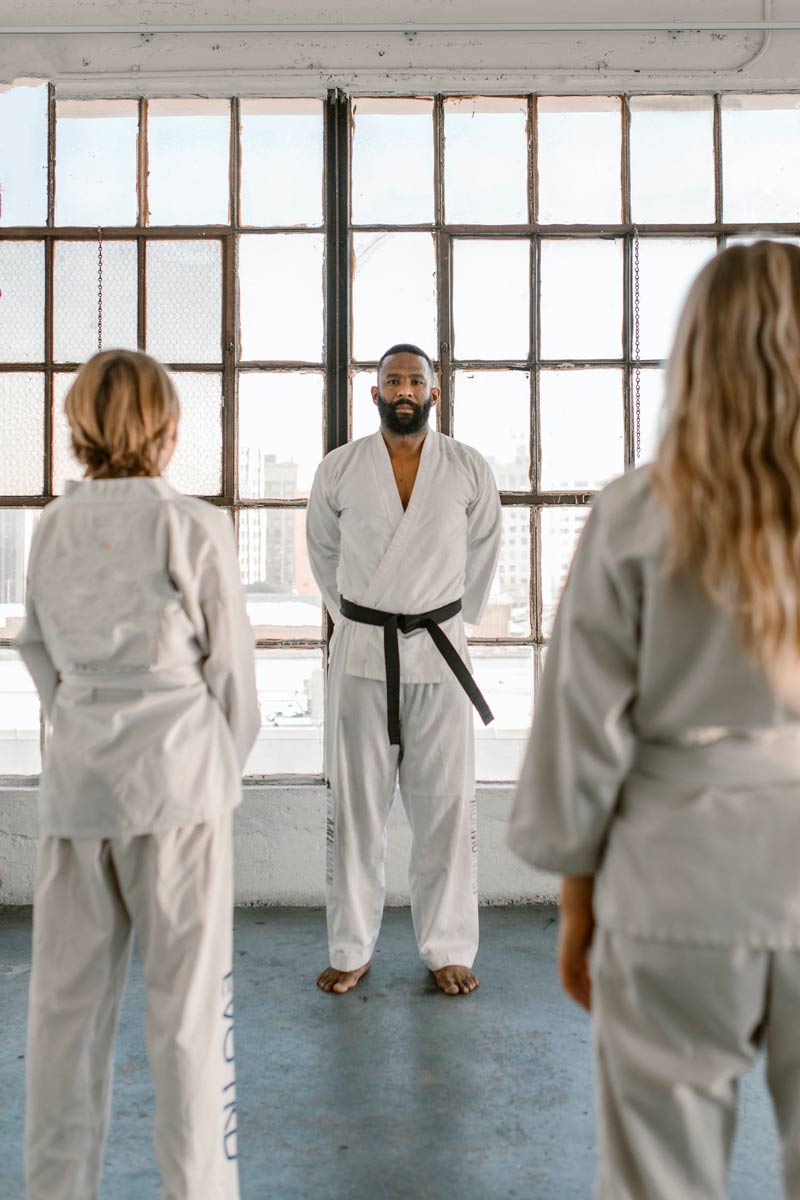 The black belt is a token of expertise that students earn after 4-5 years of dedication and practice. Make no mistake, though; this is not the end of the road. You might’ve earned the mastery and authority to become a teacher yourself, but there still are many ranks to achieve from that point on.

A black belt means you’re an expert. Still, to rise to the ranks of “master,” there are 8 more levels that you must achieve through hard work, mostly: scholarly contributions to kung fu, mastery of philosophical theories, and physical training (taolu and sanda).

The black belt is not just a symbol of expertise and maturity; it’s also the key to specialized knowledge with every rank you earn. Black belts are eligible to take on students of their own. They’re also encouraged to master other types of kung fu and continue their contributions to advance to the rank of grandmaster. 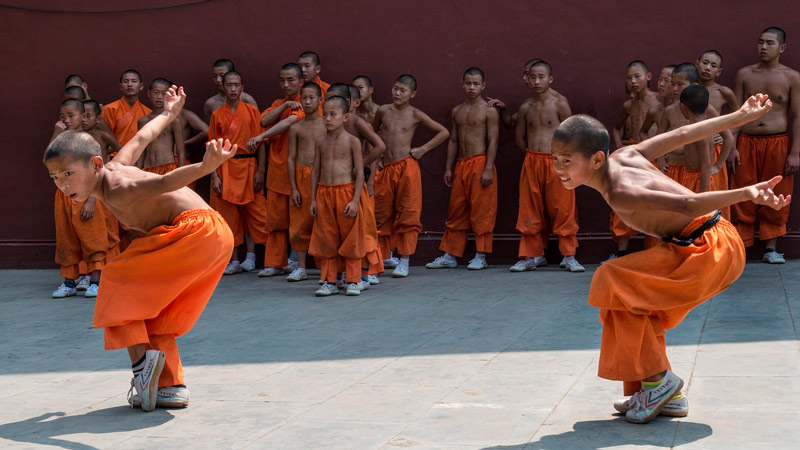 The funny thing about the kung fu belt system is that it comes from Japan. Chinese martial arts did not originally have an official way to rank their students. Sure, they would also certify their students as they moved on to the next level with a new master, but it was more of a “first-come-first-serve” kind of system where the student who’s been around the longest is ranked the highest, which made paying respect to the senior students a bit tricky.

Maybe one of their high-rank students was older than the novice who just signed up. To avoid confusion, they started to differentiate their novices from intermediate and advanced students through the use of colored sashes in the ’70s, something that the Japanese had already been implementing since the early 1900s, most famously by Judo Master Jigoro Kano. 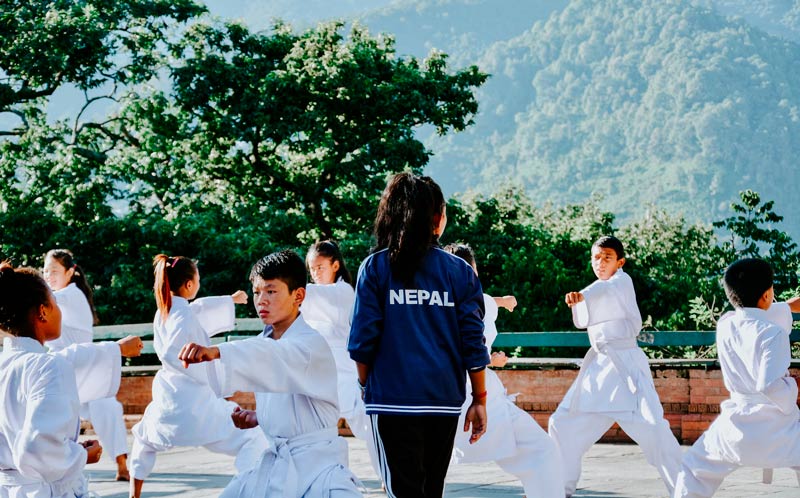 Now, regarding the criteria to promote students to the next level, kung fu schools are free to choose their milestones and belt system, which may or may not include the gold, blue, and purple belts.

The kung fu belt system may be taken from Japanese martial arts, but it conveys the values and discipline of kung fu to perfection.

To recap, you start with a white belt. Like a blank canvas, it can be intimidating but also promising. You don your yellow belt as you begin to shine with your light, but you’re still curious and eager to learn.

Curiosity turns into determination, which means it’s time to move on to the orange belt, assuming you did the work. You enter the intermediate level with a green belt, a token of growth. You move on to the blue belt and learn how to slow down and focus. Your hard work is rewarded with the purple belt, a symbol of power and ambition.

There’s a brown belt waiting for you at the beginning of the advanced stage. This means your convictions are as firm as the brown ground beneath your feet. Then comes the red belt, a sign of leadership and compromise. Finally, there’s the black belt. You now have the authority to become an instructor yourself, but if you want the rank of master, you’ll have to do the work for 8 more ranks. From that point on, the sky is the limit. 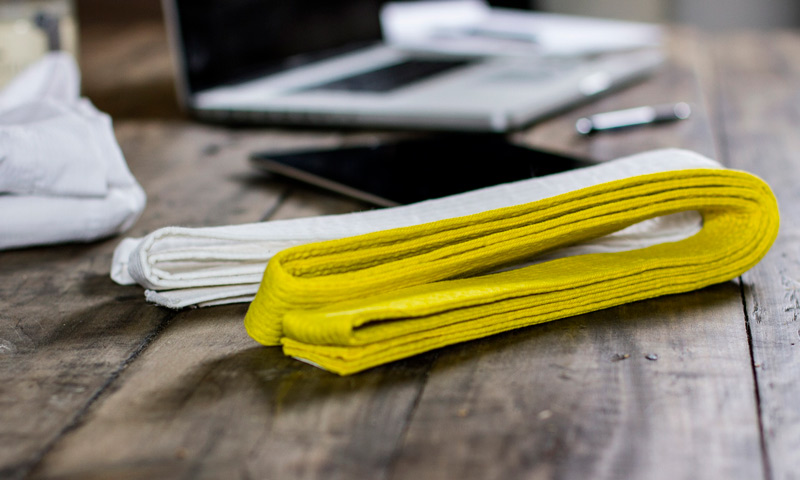